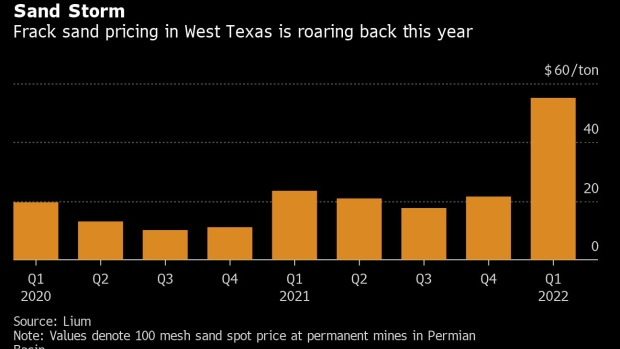 Workers change a water pipe fitting at Nomad Proppants mobile sand mining operation in Big Spring, Texas as the company is set to begin mining on Tuesday, June 21, 2022. The sand mining company says its mobile operation will allow it to deliver sand without the costs of transporting it first from a location farther away. Nomad Proppants Chief Commercial Officer Steve Brock says that this site just outside of Big Spring will be operational in a weeks time. Photographer: Matthew Busch/Bloomberg , Photographer: Matthew Busch/Bloomberg

(Bloomberg) -- Bumping along the desolate highways of the Permian Basin, the world’s busiest oil field, there are long stretches where all you see are drilling rigs, sage brush and miles upon miles of sand. That’s why it’s so strange that Texas crude producers are facing a sand shortage of more than 1 million tons and prices that have jumped 150%.

Frack sand, which gets blasted through shale rocks to unlock oil and natural gas, is averaging $55 a ton, up from $22 at the end of 2021, data from energy-research firm Lium show. Demand is climbing as oil explorers turn the taps back on after Covid-driven cutbacks. But like in so many pockets of the economy, the recovery is sparking a mismatch. Sand suppliers have seen disruptions, labor shortages and trucking bottlenecks. The chief executive officer of US Silica Holdings Inc., the largest publicly traded frack-sand miner, has dubbed the tight market “sandemonium” and said his company is sold out.

That’s where Steve Brock and his upstart sand-mining operation, Nomad Proppant LLC, come in. Since the early days of the shale revolution more than a decade ago, fracking operators have relied on mined sand that’s delivered to their sites by truck — across distances as long as 100 miles. Brock, Nomad’s chief commercial officer, wants to turn that model on its head.

His idea: Why not just use the sand that’s right under your feet?

Nomad has developed machinery that can go directly to the frack wells (give or take 10 to 20 miles), vastly reducing the burden of freight costs and the time-consuming process of trucking.

“We’re not brain surgeons here — all we’re doing is finding the best spots and washing and delivering the sand,” said Brock, 34. “Frankly, that it took us this long to get here is pretty wild.”

Brock left his job at Covia, one of the world’s biggest frack-sand miners, in February 2020 to help start Nomad. It launched its first mobile sand mine in West Texas last month, after the huge surge in prices. He calls the timing “very lucky.”

It’s sand scarcity, even more than price, that’s the big hurdle for oil drillers. Pioneer Natural Resources Co., the Permian’s biggest producer, said it expected oil and natural gas output would take a hit last quarter because of sand issues. Things are so extreme that some oil companies are shipping sand in by train from Wisconsin at almost double the cost.

Whether Nomad and rivals like Hi-Crush Inc., one of the original frack-sand pioneers that’s now also introduced mobile units, can help solve the sand squeeze could play a significant role in the global energy markets.

While drillers in the Permian have shown restraint in ramping up oil production, the last thing the world needs is for sand problems to place even more limitations on their output. The US, the world’s top oil producer and among the biggest liquefied natural gas exporters, has become an even more important supplier in light of Russia’s war in Ukraine and OPEC’s struggles to meet production targets. Meanwhile, deficits in energy supplies — and the resulting surge in prices — are among the biggest drivers of the dramatic rise in inflation across the planet.

“You cannot take sand for granted,” said Chris Wright, CEO of Liberty Energy Inc., the second-biggest frack-services provider. Without enough, “I’m quite concerned about global balances for oil, gas and food — those are intimately tied.”

Total US demand for frack sand is currently about 5% higher than the roughly 25 million tons being produced, according to industry consultant Enverus, which estimates a shortfall of roughly 1.3 million tons.

Brock of Nomad says that by carving into the earth about 15 feet (4.6 meters) deep across 40 acres, one of his mobile units can produce about 1 million tons. And since the units are mobile, Nomad doesn’t need to limit itself to the huge, dusty dunes of traditional mines.

“We can find deposits that previously wouldn’t make sense if you thought you’re stationary, because maybe this deposit only has 3 million tons,” Brock said. “That can give me two years’ worth of work, and then I can move over 2 miles to the next spot.”

The rebound for sand prices is emblematic of the inflation spreading across the Permian. Analysts at JPMorgan Chase & Co. estimate costs for US shale companies are soaring at a rate of 25%, or almost triple the headline inflation rate.

A lot of that’s driven by shortages. There aren’t enough steel pipes, not enough drilling rigs, not enough bulldozers – and critically, not enough people. Occidental Petroleum Corp. CEO Vicki Hollub has said worker shortages along with supply-chain snarls explain some of why US oil drillers aren’t significantly expanding production.

Turning sand into a mobile business tackles another area of supply-chain bottlenecks: trucking.

Because Nomad can dig up sand close to where it's needed, a single 18-wheeler can make multiple trips back and forth from the mobile mine to the well in one day. That means as few as 10 trucks total are needed, down from the roughly 70 used in traditional deliveries from mines. That brings a significant drop in freight costs. But even more critically in the Permian, where labor is extremely tight and the unemployment rate is hovering just above 3%, it means needing fewer truck drivers.

As Brock puts it: “You solve that issue, you solve a lot of problems.”

Devon Energy Corp., one of the region’s biggest explorers, is among those already turning to mobile mines. The company is working with Hi-Crush to develop its unit. The pilot project will sit on a roughly 5-acre pad site and account for a quarter of Devon’s total sand needs in the Delaware Basin, in the western half of the Permian.

“It gives us a sense of security with our supply,” said John Raines, vice president of Devon's Delaware Basin business unit.

It’s also helping to spark a revival for companies like Hi-Crush, which went into bankruptcy during the sand-bust days of 2020.

“It's definitely our growth engine,” Hi-Crush CEO Dirk Hallen said of the company’s three mobile units and plans to roll out more later this year. With fracking operators now consuming almost three times as much sand each month as they did five years ago, Hallen said demand is likely to stay strong.

And Brock of Nomad points out that mobile units will be able to meet demand faster than traditional mines because not having to truck as far also means eliminating the time-consuming step of drying.

After sand is dug up, it gets washed and then left to air dry in piles for a few days. At stationary mines, it then gets blasted in giant drying machines. That way when trucks are loaded, they’re carrying as much sand as possible. But Brock says since his trucks only go a short distance, he can skip the machine drying, eliminating pricey equipment.

The cost savings were a key part of Nomad’s pitch as the company was getting off the ground during the depths of the pandemic, when Brock says prices were so low that sand was a “four-letter word,” and not just literally.

“When you get crunched, and you need to start saving some money,” he said, “you start getting creative.”