What Does the Inverting Yield Curve Mean?

A section of the U.S. Treasuries yield curve just inverted for the first time in more than a decade.

The spread between 3- and 5-year yields fell to negative 1.4 basis points Monday, dropping below zero for the first time since 2007, and the 2- to 5-year gap soon followed. The 2- to 10-year is more closely watched as a potential indicator of pending recessions. But Monday’s move could be the first signal that the market is putting the Federal Reserve on notice that the end of its tightening cycle is approaching.

While the yields on shorter-maturities fell on Tuesday during Asian hours, the spread between 3-, 5-year yields remained stable. Longer-maturity bonds rallied sharply, flattening the long-end of the yield curve. The U.S. 10-year slipped another 3 basis points to 2.94 per cent, dropping below the 200-day moving average for the first time this year.

Some analysts attributed the short-end underperformance to demand for riskier assets as global trade tensions eased following this weekend’s tariff truce between U.S. President Donald Trump and China’s Xi Jinping. Others pinned it to modestly higher expectations for Fed hikes next year after the summit between the two leaders. Either way, the five-year is faring better because investors anticipate the end of the central bank’s hiking path beyond next year.

“The outright inversion could be reflective of the market pricing in some cuts starting in 2020, which may be helping the 5-year tenor outperform slightly,” said TD Securities rates strategist Gennadiy Goldberg. 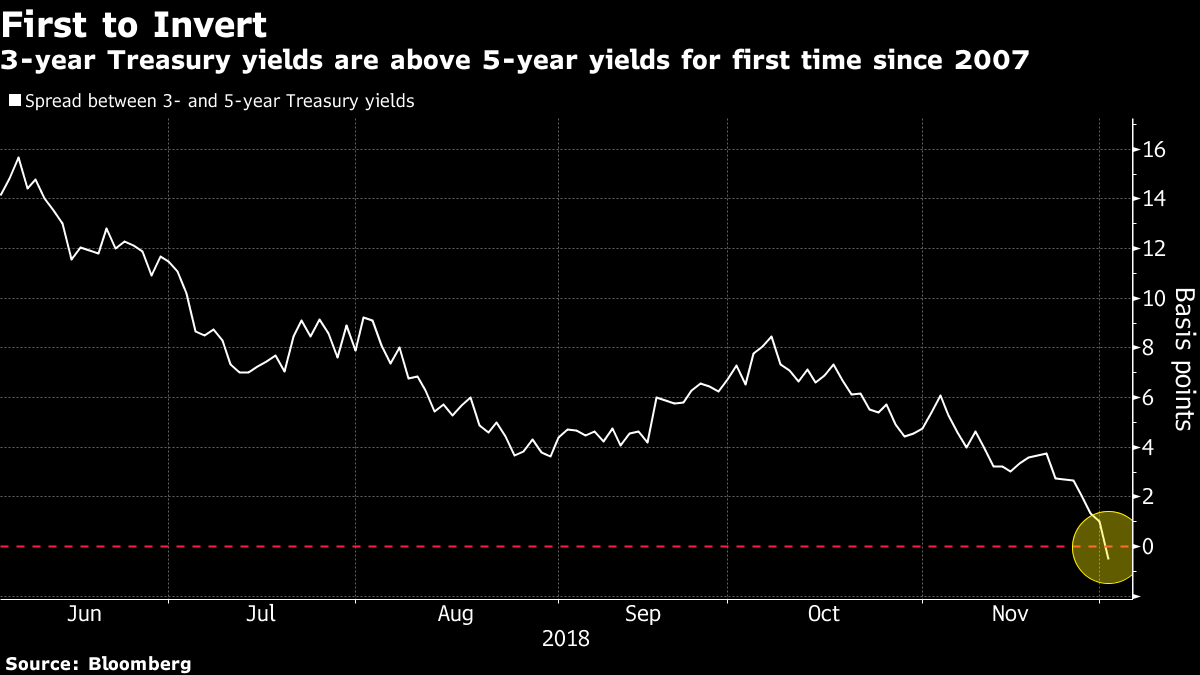 The spread between December 2018 and December 2019 eurodollar futures -- a measure of how much tightening traders expect next year -- reached 27 basis points Monday, meaning just more than one quarter-point Fed hike. It was last at 21 basis points.

“It’s a risk-on move, and the relief trade we’re seeing has allowed the front-end to reprice higher,” said Marty Mitchell, an independent strategist.

Curve flattening over the past two years has signaled investors’ concern that rising rates against a backdrop of slowing global growth could harm the U.S. economy. Inversion -- where yields at the short end rise above those at the long end -- has been a reliable indicator of recessions.

Some analysts cautioned against reading too much into Monday’s inversion.

“I don’t think that that the 3s5s inversion alone will impact performance across asset class in the near term,” said John Iborg, a portfolio manager at QS Investors LLC. “More flattening or an inversion in 2s10s and 10s30s will grab people’s attention more and will matter more to market participants and expected returns.”

The spread between 2- and 10-year rates -- arguably the most closely watched section of the curve -- dwindled below 15 basis points, the flattest since 2007.

For BMO Capital Markets, 10 basis points is the next level to watch.

“The combination of a committed FOMC and mounting global economic headwinds puts the curve below zero as 2019 gets underway,” analysts including Ian Lyngen wrote in a note. “If not then, the March FOMC meeting becomes the most opportune inflection point.”