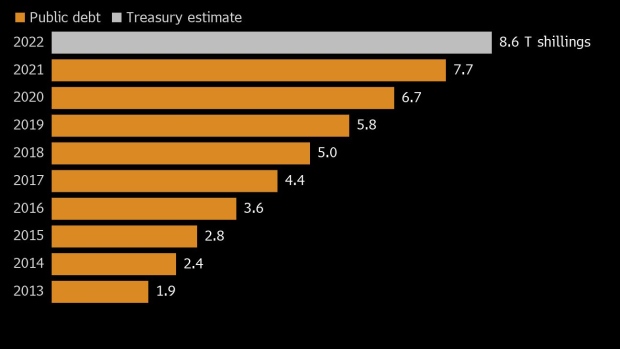 Ruto’s victory was announced Monday, a week after an election that was set against a backdrop of soaring living costs, ballooning debt and a crippling drought. The 55-year-old pledged to rein in debt, spend 500 billion shillings ($4.2 billion) to support entrepreneurs and farmers, and create jobs for millions of unemployed youths.

The following are some of the biggest economic challenges the incoming president faces:

Consumer prices are rising at the fastest pace in more than five years, forcing the government to introduce subsidies on food and fuel. The surge in inflation has made it even harder for Kenyans to make ends meet.

More than a third of Kenya’s 51 million people live in extreme poverty, which the World Bank defines as those who earn less than $1.90 per day. Their lack of buying power means Kenya’s poor face food insecurity, low levels of educational attainment, and reduced access to basic services like sanitation and water.

The plight of the urban poor is even worse. According to the African Population and Health Research Center, 60% of the population in Nairobi, the capital, live in slums. They have no access to services including healthcare and education, which contributes to high levels of disease and mortality.

Public debt surged to a record 8.56 trillion shillings ($72 billion) in May, from 1.9 trillion shillings in 2013 when Kenyatta’s administration came to office. The ratio of debt to gross domestic product has climbed to 69.1%, and the country is classified as being at high risk of distress by the International Monetary Fund.

Last month, lawmakers raised the nation’s debt ceiling by 11% to 10 trillion shillings, giving the government additional head room to fund its 862 billion-shilling budget financing gap in the 12 months through June 2023. Kenya spent almost 57% of tax income in the past financial year paying off loans, according to the Treasury.

The cost of servicing the public debt is expected to hit a record 1.39 trillion shillings in the current fiscal year, more than half of projected state revenue. In an analysis by Bloomberg Economics, Kenya was ranked the sixth-most vulnerable to a debt crisis among 50 developing economies. China, which accounts for about one third of Kenya’s 2021-22 external debt service costs, is the nation’s biggest foreign creditor after the World Bank.

The number of unemployed youth in Kenya is estimated at 14%, according to the International Labour Organization. That’s double the official unemployment rate of 6.2%. As many as 5.2 million young adults are unable to find meaningful employment -- a pressing concern for policymakers, as the workforce is expanding by 1 million people every year, according to the World Bank.

Kenya is poised to expand 4.3% through 2030, according to Harvard University’s Growth Lab. That’s slower than smaller neighbor Uganda, which will be the world’s fastest growing economy in the period. Kenya has been diversifying into selling products overseas that are less complex, with agricultural goods and minerals being the main exports. According to the Growth Lab, countries whose exports are more sophisticated, grow faster.

Kenya’s economic growth averaged 4.4% in the decade since 2012, according to the Kenya National Bureau of Statistics. That rate is far below the target set under the country’s ambitious ‘Vision 2030’ plan that sought to grow the economy by 10% per annum between 2012 and 2030 and transform the economy into a newly industrializing, so-called middle-income country. The low growth trajectory has hobbled job growth, stunted tax revenues, and impaired the country’s efforts to cut down poverty.

Corruption consistently ranks as one of the biggest problems in Kenya. The head of Kenya’s public service, Joseph Kinyua, estimates that one-third of the nation’s annual budget is lost to graft, while accounting firm KPMG LLP says wasteful spending and crimes including bribery and tender fraud consume about 10% of the nation’s $95 billion GDP annually. Kenyatta said last year that as much as 2 billion shillings is stolen daily from the government. Kenya scored just 30 points out of a possible 100 for its efforts to fight graft in Transparency International’s 2021 Global Corruption Perceptions Index. While that was a marginal improvement from the 26 points it got in 2016, it was still below the African average of 32.

Kenya ranks as highly vulnerable to climate change, according to ACAPS, a non-profit. More than four-fifths of Kenya’s land is arid and semi-arid, and the country is exposed to extreme natural events, including drought and floods.

An average drought results in a food deficit of as much as 30%, cuts GDP growth by as much as 5%, and affects the livelihoods of more than 80% of the population, according to a government submission to the United Nations Framework Convention on Climate Change. A 2011 drought caused damage estimated at $11 billion, while another between 2014-18 left 3.4 million people facing starvation and half a million lacking access to water. The country is currently facing its worst drought in four decades.

While Kenya accounts for less than 0.1% of global emissions, it has pledged to reduce its greenhouse gas emissions by 30% by 2030. In a government document sent to the UN framework convention on climate change in 2020, the country needs $62 billion to mitigate and adapt to the climate crisis by 2030, equivalent to almost 67% of Kenya’s GDP at the time.