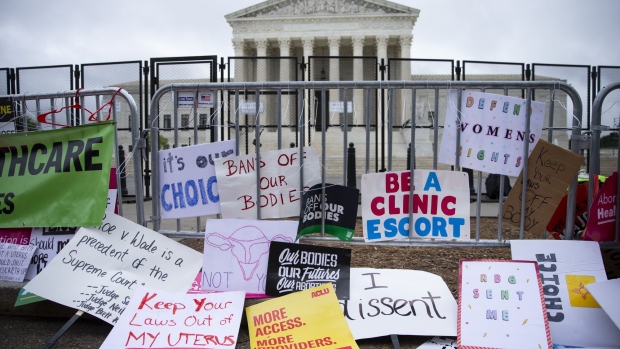 Posters outside of the Supreme Court building during a nationwide rally in support of abortion rights in Washington, D.C., on May 14. Photographer: Sarah Silbiger/Bloomberg , Bloomberg

(Bloomberg) -- The Knot Worldwide, best known for its wedding-planning website The Knot, will reimburse employees who need to travel to obtain abortion care.

Chief Executive Officer Timothy Chi announced the policy in a LinkedIn post Friday, saying the changes come in light of Roe v. Wade’s precarious standing as a legal precedent. The company is extending its parental leave policy to as many as 20 weeks of paid leave and will begin covering travel costs incurred by employees who need to travel more than a “reasonable distance” to seek reproductive healthcare, including abortion.

Read More: How US Companies Are Supporting Workers on Abortion

The Knot Worldwide employs 1,900 people in 16 countries, a spokesperson for the company said. Its holdings include its namesake wedding marketplace, The Knot, as well as a pregnancy-focused imprint called The Bump. They also operate the Spanish-language site Bodas, which serves parts of Europe as well as Latin America.

“As a company employing thousands and serving millions of women globally, we pride ourselves on helping people around the world celebrate life’s greatest moments, but that’s only possible when everyone is empowered to make the choices that are right for them,” Chi said in the post. He said the company will also begin petitioning senators in states where they have offices, including Texas, Nebraska and New York, and advocate against bans and restrictions.

He added that the abortion-access battle is “a complex issue that will not be resolved in a few weeks or a couple of months,” and that the company is “in the process of identifying partners that will enable us to have a meaningful impact on the lives of women.”

The change in policy follows the path of Apple Inc., Bumble Inc., Citigroup Inc. and other companies that are covering travel costs for employees who need to travel 100 miles or more, or even to another state to obtain health services.