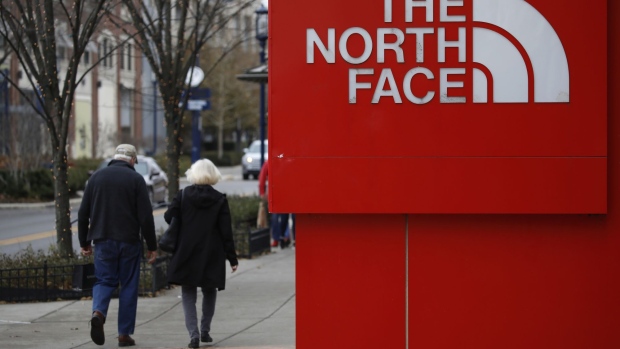 North Face Inc. signage outside a store at the Easton Town Center shopping mall in Columbus, Ohio, U.S., on Friday, Dec. 10, 2021. Prices for popular shopping categories are rising the fastest in decades, putting political and public pressure on the Federal Reserve to curb inflation, not to mention potentially crimping outlays as Americans finish off their holiday shopping list. Photographer: Luke Sharrett/Bloomberg , Bloomberg

(Bloomberg) -- VF Corp. slumped after cutting its revenue outlook for the year amid a slowdown in its activewear brands and international sales.

The maker of Vans and The North Face apparel now expects revenue of about $11.85 billion for the fiscal year ending around April 1, down from a prior view of about $12 billion. Adjusted gross margin is now projected to be at least 55%, down 1 percentage point from the company’s October forecast.

The shortfall appears to be in part due to VF’s Active division, along with slowdowns in international revenue, direct-to-consumer and the digital business. In October, VF said Active sales in China were hurt by weaker digital traffic for nondomestic brands. On Friday, the company lowered its outlook for revenue growth across all regions outside the U.S., with the biggest cuts coming in Asia-Pacific.

Shares of VF fell 5.3% in premarket trading at 8:56 a.m. New York time. The stock had fallen 15% in the previous 12 months, among the worst performers in the S&P 500 Consumer Discretionary Index.