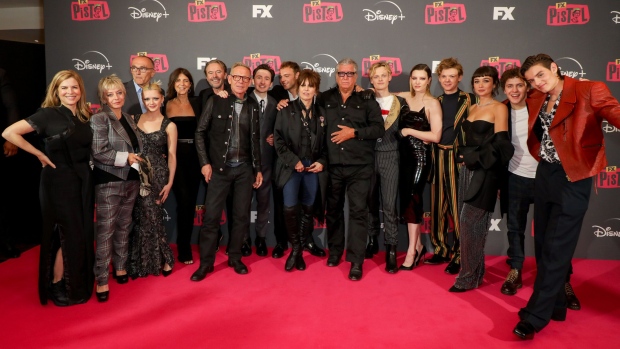 (Bloomberg) -- Anarchy on Disney+. Close to 50 years after the Sex Pistols shook up the music scene with the birth of the punk movement in Britain, a six-part series about the band called Pistol is arriving on the streaming service in the UK and on Hulu in the US.

The show is directed by Danny Boyle (Trainspotting, Slumdog Millionaire), written by Craig Pearson (Moulin Rouge), and is based on the book Lonely Boy: Tales From a Sex Pistol by guitarist Steve Jones. It chronicles three especially chaotic years as the band became household names, stoked a moral panic, and recorded one of the most heavily censored albums in British history that coincided with the height of Queen Elizabeth’s Silver Jubilee celebrations.

“Punk rock has become almost a battle cry in British society. For many people, it’s a bigger threat to our way of life than Russian communism or hyperinflation,” said BBC Presenter Brian Trueman in 1977, and the show goes into depth to show how that battle cry was born.

Much like its subjects, Pistol has been mired in controversy. Frontman John Lydon—better known as Johnny Rotten—sued to stop the show from using the Sex Pistol’s music.

“Disney have stolen the past and created a fairy-tale, which bears little resembles to the truth,” said Lydon, calling the show a “middle class fantasy” and “nonsense.”  A judge ruled against Lydon and in favor of Steve Jones and Disney, and the Sex Pistols’ music punctuates the project, along with a stellar soundtrack that includes Pink Floyd and plenty of David Bowie. Danny Boyle said at the premiere that the band’s manager Malcom McClaren would “love the show being on Disney,” saying that he’d get a kick out of it; McLaren died in 2010.Pistol opens on archival footage of the Queen in the mid-’70s, interspersed with images of poverty, demolished buildings, and the British establishment, painting a clear picture of the disparity in wealth and opportunity between the haves and have-nots. The cuts between archive footage and newly shot footage are chaotic, raw, and occasionally over the top, much like the band itself.

“It’s really about a bunch of kids who were the lost generation, they had no future, they were told they were garbage like the garbage piling up on the street, and they said, ‘OK, we’ll show you what that looks like. We are angry, we’ll make our own future,’” said writer Craig Pearson.As the show’s heart, Jones, one of those boys with “no future,” is played with a mix of bravado and barely hidden childhood pain by Toby Wallace, wavering between rock star and lost little boy. He’s first seen swaying to David Bowie’s Moonage Daydream before stealing Bowie’s mic—complete with lipstick marks—and other equipment at the Hammersmith Odeon. He stumbles outside, full of frenetic energy and makes a getaway with his loot.The first two episodes chart the birth of punk movement in the UK. Talulah Riley plays Vivienne Westwood as an edgy young designer with a boutique on the Kings Road before she became the fashion megastar of today. Thomas Brodie-Sangster (The Queen’s Gambit) plays McLaren, who is more concerned about the movement than the music.

What Boyle makes clear is the rage, desperation, and hopelessness felt during the punk movement’s beginnings. It’s a message that resonates even more now than when the series started filming in early 2021.

Britain’s inflation rate has surged to its highest levels since 1982, and costs for food and gas have risen much faster than average pay. The Queen is about to celebrate her Platinum Jubilee and luxury hotels are booking up, but basic goods and services for a typical family with two children cost more than £400 ($502) than they did last year. It’s not hard to imagine why “no future for us,” as sung by Rotten, is a line that still resonates strongly with an audience.

Punk does look a little different through a 2022 lens. Pistol premiered at the Odeon Luxe in Leicester Square, where actors, filmmakers, journalists, and influencers meandered down a hot-pink carpet, taking selfies with posters promoting the show. It’s punk commodified, perhaps the logical conclusion to when the Met Gala celebrated punk in its annual theme nine years ago.

T-shirts with the iconic GOD SAVE THE QUEEN image from the band’s single were handed out, a far cry from the total ban imposed on the song by the BBC when it came out in 1977. This is not counterculture or chaotic or shaking up the establishment—it’s a very fun series by the world’s largest entertainment company.

But thanks to strong performances, Pistol is a wild, loving tribute to those who, in the words of Jones, were going to “kick this country awake, if it kills us.”

Pistol premieres on Disney+ in the UK and Ireland on May 31, and on Hulu in the US the same day.