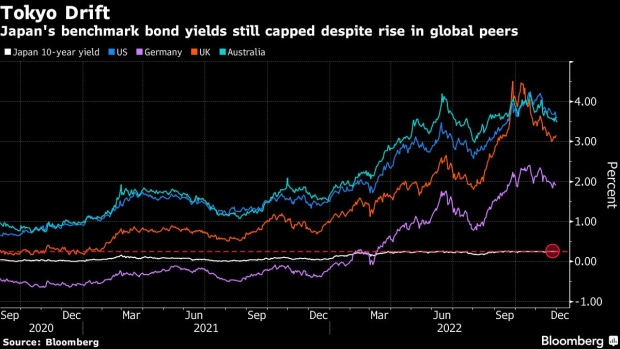 An employee handles bundles of Japanese 10,000 yen banknotes at a branch of Resona Bank Ltd. in Tokyo, Japan, on Tuesday, Aug. 9, 2022. Dollar-yen, which soared 38% from a March 2020 trough to mid-July this year, is in retreat. Photographer: Kiyoshi Ota/Bloomberg , Bloomberg

(Bloomberg) -- The world’s worst-performing major currency looks poised for an impressive turnaround in 2023 as its two key drivers -- a hawkish Federal Reserve and a dovish Bank of Japan -- swap places in the eyes of some investors.

The yen -- a favored short against the dollar for a majority of this year -- could rally more than 9% from current levels next year, according to Barclays Plc and Nomura Holdings Inc., while Vontobel Asset Management AG said fair value is below 100 per dollar -- over 35% stronger. State Street Global Markets sees a quick snap back as fears of aggressive US interest rate hikes recede, while T. Rowe Price said there’s scope for gains on a more hawkish BOJ.

“We are probably approaching peak yen weakness to the dollar,” said Sébastien Page, head of global multi-asset at T. Rowe, which oversees $1.28 trillion in assets. When the Fed finally pauses on hiking, “there is room for the Bank of Japan to surprise the market by being a bit more aggressive” on policy and boost the currency.

The bullishness is a marked change in tune from September when hedge funds couldn’t get enough of shorting the yen -- a high profile casualty of the BOJ’s ultra-dovish monetary policy. The widening yield gap between the US and Japan, with the former hiking rates aggressively and the latter keeping them at rock-bottom levels to boost the economy, helped push the currency down as much as 25% this year.

Now a combination of direct market intervention from the Japanese government and hopes the Fed will slow its pace of rate hikes have helped the yen climb more than 10% from its October nadir. Speculation over a potential policy tweak from the BOJ -- which will be under new leadership from April -- is likely to add fuel to that rebound.

A stronger yen would reverberate past the borders of the world’s third-largest economy, potentially siphoning hundreds of billions in dollars of capital back to Japan while bludgeoning the bottom lines of the nation’s export giants. It would also dampen demand for the popular yen carry trade -- where investors borrow in the low-yielding Japanese currency to invest in ones with higher rates and pocket the difference.

The yen was trading around the 137.20 per dollar level in Asia Tuesday. In October it hit 151.95, its weakest level in three decades.

Many bullish yen bets center around the thesis that US interest rates are fast approaching a peak and the Fed may be spurred to ease in a downturn. For funds such as Jupiter Asset Management and abrdn, that’s a strong possibility next year.

“The Fed should change its tack to a relatively dovish side in a quick way in 2023,” said Hachidai Ueda, senior investment specialist of fixed income at abrdn, who expects to see the yen strengthen to as high as 130 per dollar. The greenback will “lack the driver to the upside which it had in 2022.”

Pricing in futures markets suggest traders see US rates peaking around the middle of next year.

Funds are also piling on wagers that it’s only a matter of time before the BOJ, the last major developed-market central bank clinging to dovish policy, will capitulate. That’s likely to happen some time after Governor Haruhiko Kuroda steps down in April, and will only further catapult the yen’s gains, said Mark Nash, money manager at Jupiter in London.

“At some point into next year then Japan justifiably will be hiking rates as well,” said Nash, who sees the potential for the yen to strengthen to the 120 per dollar range.

Ten-year Japanese swap rates -- which are popular with international funds -- have climbed well beyond the BOJ’s 0.25% ceiling for the benchmark bond. That’s a sign that traders are betting the central bank will tweak its policy of capping 10-year yields.

The BOJ could ditch its control over benchmark bond yields over the next three to six months, and “that’s when the dollar completely moves” lower and boosts yen gains, said Sonal Desai, chief investment officer for fixed income at San Mateo, California-based Franklin Templeton.

The cocktail of a normalizing monetary policy and a still-cheap yen could also see Japan’s currency fast re-gaining prominence as a haven.

Investors received a taste of that when the yen outperformed peers in the last few days of November as concern over China’s Covid policy triggered demand for safer assets.

Expect more of that to come as fears of a downturn rip across markets, according to Vontobel’s Sven Schubert, senior investment strategist in Zurich.

“The yen could benefit as a US recession will likely lead to safe haven demand,” said Schubert. While the firm also likes the Swiss franc as a haven, “the starting point for the Japanese yen is more extreme” after its losses this year.

--With assistance from Chester Yung and Naomi Tajitsu.