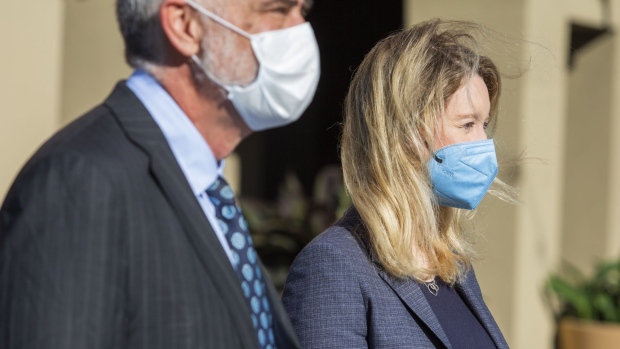 Elizabeth Holmes, founder and former chief executive officer of Theranos Inc., right, exits U.S. federal court in San Jose, California, U.S., on Thursday, May 6, 2021. Holmes and her lawyers appeared in-person Thursday in the federal court where the Theranos founder and former chief executive officer is scheduled to go to trial in August on charges that the blood-test startup once valued at $9 billion was a fraud. , Bloomberg

Elizabeth Holmes could be saved by a jury that’s Silicon Valley savvy.

Lawyers for the Theranos Inc. founder have complained that years of “inflammatory” publicity will make it hard to find unbiased jurors. But legal experts say what Holmes needs are jurors well-versed in the startup scene who will be open to the idea that the blood-testing company was an innocent failure rather than a massive fraud.

According to this view, Holmes may be able to prevail if her account of the collapse of Theranos resonates with jurors’ understanding of how entrepreneurs make sales pitches to attract investors -- and how best-laid plans can go awry.

Making the trial more complicated, Holmes may make a pitch for sympathy from the jury by arguing her mental health was impaired by “a decade-long campaign of psychological abuse” at the hands of co-defendant Ramesh “Sunny” Balwani, her former romantic partner and president of the company. Her allegation was revealed in court filings unsealed over the weekend, just before jury selection gets under way Tuesday.

Employees at the region’s thousands of startup companies are regularly summoned for jury duty in federal court in San Jose, California, which could be critical to Holmes’s defense, said Mark MacDougall, a former federal prosecutor who’s now a white-collar criminal defense lawyer in Washington. Attorneys representing Holmes should worry about jurors who don’t read the newspapers and have never heard of Theranos, he said.

Jurors familiar with the culture of startups can be convinced that “puffery in sales doesn’t equate to deception,” MacDougall said. They understand that in starting a company “all you have is an idea,” and that pitching a new technology means “you’re going to pump that idea full of promise and expectation -- because that’s what you do.”

Jurors must decide if Holmes is guilty of alleged fraud and conspiracy for lying to doctors, patients and investors about the accuracy and capabilities of Theranos’ machines to perform hundreds of tests for disease using a small sample of blood. Holmes was the company’s chief executive officer until it dissolved in 2018.

Two hundred potential jurors filled out questionnaires designed to weed out bias against either Holmes or the government. About half have already been eliminated, with those remaining facing some further questioning by prosecutors and attorneys representing Holmes, but mostly from the judge handling the trial. The final panel will consist of 12 jurors and five alternates.

Holmes’s lawyers didn’t include any queries related to a possible mental-health defense in the questionnaire they proposed for jurors, but U.S. District Judge Edward Davila has said he plans to raise the issue during the juror screening process, which is expected to take about two days.

Lance Wade and Kevin Downey, lawyers representing Holmes, didn’t respond to an email seeking comment. Balwani, who has denied the abuse allegations, has won the judge’s approval for his trial to be conducted separately from Holmes’s.

Some legal experts describe jury selection as an art form. Wealthy defendants can spend tens of thousands of dollars on consultants using mock juries to help lawyers try to divine which jurors might jam up deliberations and block the unanimous vote required to win a conviction. Prosecutors will be looking for jurors who can work as a team and arrive at a consensus, experts said.

In complex fraud cases, the government wants highly educated jurors or those whose work requires analytical thinking, said Barbara McQuade, a former U.S. Attorney who teaches at the University of Michigan Law School. That’s because prosecutors most often lose cases not when jurors don’t believe the government’s case but because they don’t understand them, she said.

“If they have strong personalities, then they could be polarizing in the jury room and lead to a hung jury,” McQuade said. “A good group dynamic is essential to reaching a good decision.”

Still other experts liken jury selection to a game of chance in which consultants, lawyers and legal experts aren’t truly able to pin a win or a loss on any particular personality type or dynamic in jury deliberations.

Every trial and every jury panel is different, said Bill Portanova, also a former prosecutor turned criminal defense lawyer. “The good news, however, is that most juries come up with the right verdicts against the right people most of the time,” he said.