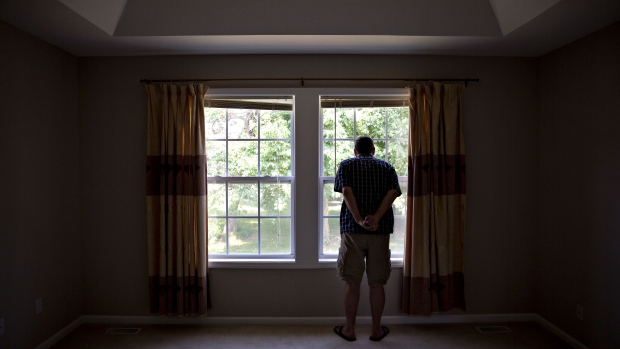 A prospective home buyer looks out the master bedroom window at a house for sale in Dunlap, Illinois, U.S., on Sunday, Aug. 19, 2018. The National Association of Realtors is scheduled to release existing homes sales figures on August 22. Photographer: Daniel Acker/Bloomberg , Bloomberg

OTTAWA -- As fixed-rate mortgage rate offerings tumble, those with variable loans thinking about switching over and locking in need to consider more than just the rate, experts say.

James Laird, co-founder of Ratehub.ca and president of CanWise, says the rates being offered on fixed-rate mortgages in Canada are the lowest they've ever been, so it is logical to consider your options.

However, he stressed the benefit of a variable-rate mortgage if there is a possibility that you might need to break it before the term is up because the penalties assessed on a fixed-rate mortgage can be significantly higher.

"Whenever people get a mortgage, especially when they are buying a house, they feel very settled in their life, their job, their relationship, their financial situation, it all feels very certain to them. But then over time, life happens," he said.

"Then three years in, you're thinking your existing home doesn't make sense any more and so way more Canadians end up breaking their mortgage than they think they are going to."

Just as it sounds, a fixed-rate mortgage keeps a single interest rate for the term of the loan, while with a variable-rate mortgage the rate charged varies depending on the prime rate.

Changes to the prime rate generally happen when the Bank of Canada makes changes to its key policy rate: when it goes up, prime rates go up too, and vice versa.

The Bank of Canada slashed its key policy rate earlier this year as part of an effort to help boost the economy when the COVID-19 pandemic forced millions of Canadians out of work and non-essential business ground to a halt. When that happened, prime rates dropped and the rates charged on variable-rate loans also moved lower.

Since then, the offerings for five-year fixed-rate mortgages have also moved lower, with rates from some lenders now below two per cent.

"We're in a different sort of environment right now with rates being so low," she said, noting that the prime rate is low, but that it will go up eventually when the economy recovers.

"So locking in right now at these rates ... is probably not such a bad decision."

However, Laird notes, those who have had a variable-rate loan for a couple of years already may not be able find a better fixed-rate option.

With the prime rate at Canada's big banks now at 2.45 per cent, those with a discount of a half of a percentage point or more from prime could be hard pressed to find a fixed-rate offering better that what they are currently paying.

Like Fonseka, Laird said the Bank of Canada will raise rates at some point in the future and that will push the rates charged on variable rate mortgages higher, but when that will happen is an unknown.

"The more optimistic you are about how quickly we're going to recover ... the more you should lock into a fixed rate because when things get back to normal rates will go up," he said.