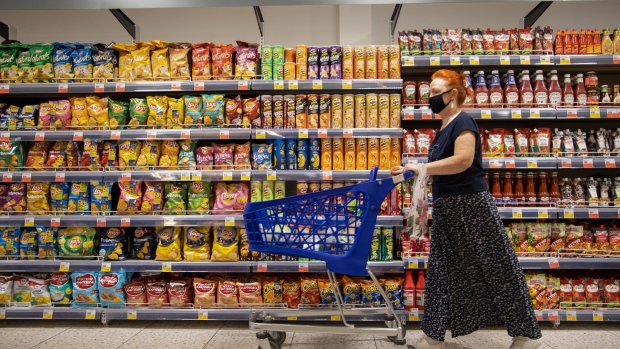 A shopper pushes a cart past packets of crisps inside a Lenta IPJSC supermarket in Moscow, Russia, on Monday, May 24, 2021. , Photographer: Andrey Rudakov/Bloomberg

Consumers around the world are about to get socked with even higher prices on everyday items, companies from food giant Unilever Plc to lubricant maker WD-40 Co. warned this week as they grapple with supply difficulties.

The maker of Dove soap and Magnum ice-cream bars jacked up prices by more than 4 per cent on average last quarter, the biggest jump since 2012, and signaled elevated pricing will continue into next year. A similar refrain came from Nestle SA, Procter & Gamble Co. and Danone SA, whose products dominate supermarket aisles and kitchen cupboards.

“We’re in for at least another 12 months of inflationary pressures,” Unilever CEO Alan Jope said in a Bloomberg Television interview. “We are in a once-in-two-decades inflationary environment.” 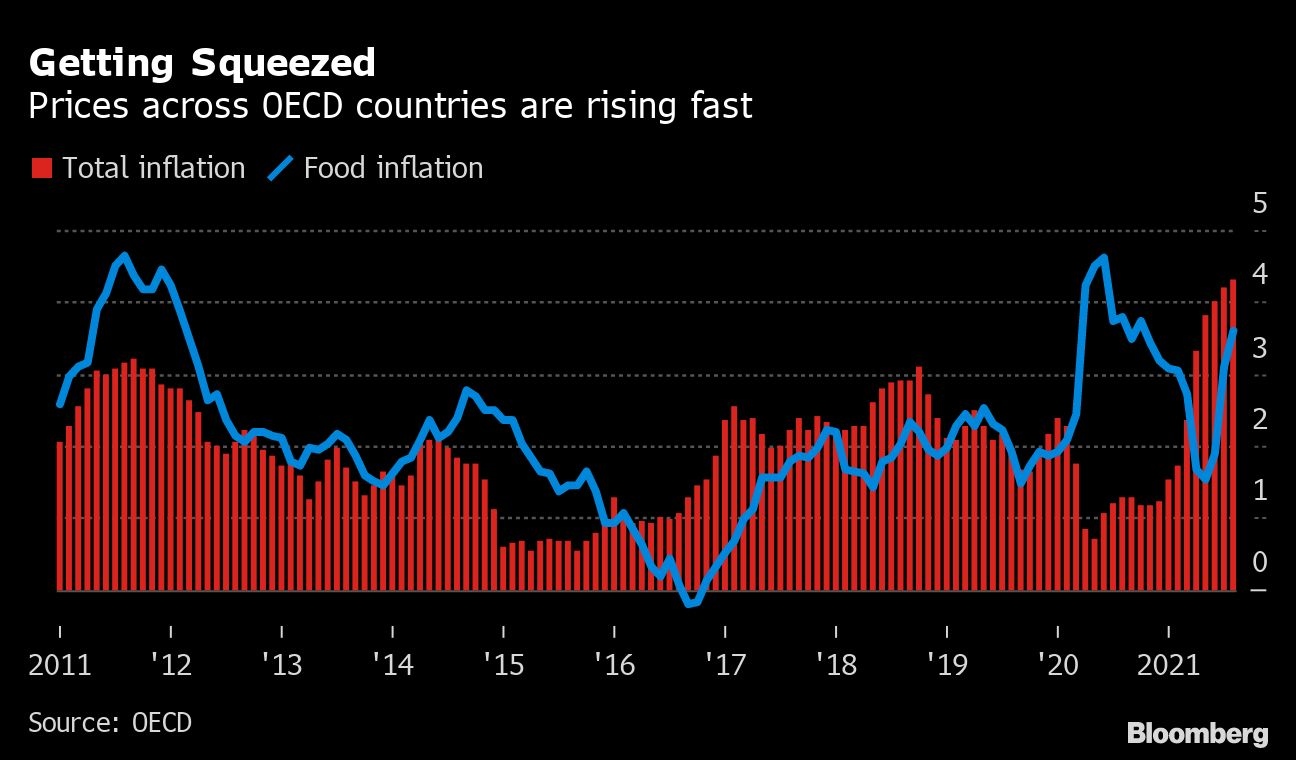 Companies are facing a dire mix of supply-chain challenges, as well as higher costs for energy, raw materials, packaging and shipping. While most consumer-goods makers reporting results this week expressed confidence that they’ll be able to limit the long-term hit to profitability, that means the pain passes to consumers, upping the squeeze on pockets as Christmas approaches.

U.S. inflation has accelerated rapidly this year to the strongest since 2008. Across developed economies, the post-pandemic supply-demand imbalances have pushed the rate above 4 per cent for only the second time in the past two decades.

In the U.K., the cost of hedging against inflation over the next decade rose on Friday to the highest level in 25 years.

The return of pricing power marks a sea change in the global economy and poses a new challenge for central bankers after years of undershooting inflation targets. They’re trying to figure out whether they should quicken the removal of stimulus from pandemic-hobbled economies, or stand pat because the price spikes are temporary.

“This is a story that’s consistent across the world,” said Jennifer Lee, senior economist at BMO Capital Markets. “It’s just something consumers have to resign themselves to right now.” 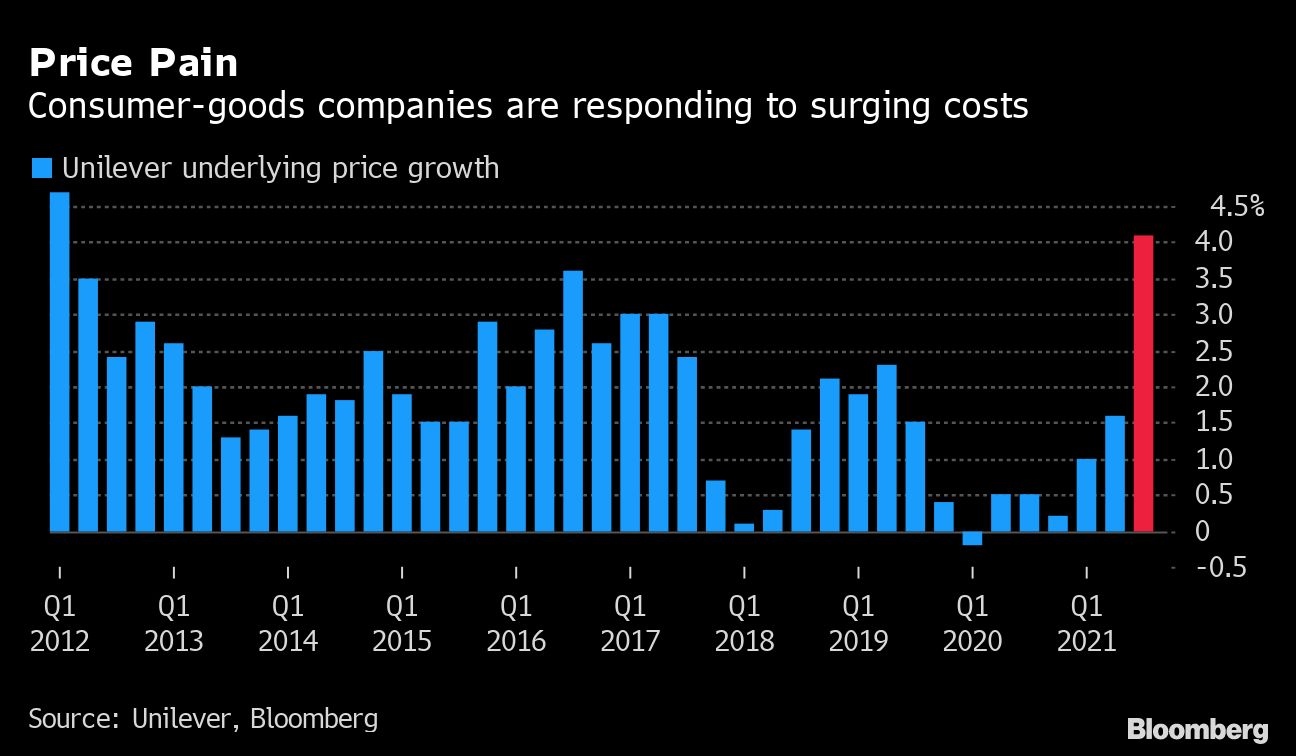 Companies typically raise prices gradually, which is why the start of an inflationary period usually damages profitability the most. If they pass on cost increases too quickly, shoppers will shift to cheaper products from competitors or put off purchases. Some are also locked into contracts, creating a delay in households feeling the pinch.

“You can’t pass on increases from one day to another,” Nestle CEO Mark Schneider said on Bloomberg TV this week. “But now that action is underway.”

Nestle’s overall pricing rose 2.1 per cent in the third quarter, the fastest in at least five years.

Consumers in emerging markets have so far faced the biggest inflation, as seen in Nestle’s results. The Swiss food giant, which makes Nespresso coffee and DiGiorno pizzas, raised pricing in such countries by 2.6 per cent in the first nine months of the year, three times the rate of developed markets. Schneider expects margins to drop this year given the time lag required to pass on higher costs. Then they should resume improving in 2022.

“What we see from the inflation front is that the situation is going to get worse and then of course we’re working on pricing to make up most of that,” Schneider said.

Danone has also indicated that shoppers in Europe and the U.S. won’t escape the squeeze. It expects costs to rise about 9 per cent in the second half of the year. “We could see even higher inflation rates next year,” Chief Financial Officer Juergen Esser said on a conference call.

P&G, the maker of Downy fabric softener and Puffs facial tissues, expects US$2.3 billion in expenses this fiscal year from elevated commodity and freight costs. It’s increased prices on numerous products and says the situation will continue to “evolve.”

The Federal Reserve said in a report on the U.S. economy this week that many firms are showing a “greater ability to pass along cost increases to customers amid strong demand.”

One measure of U.S. inflation expectations has surged to its highest since 2005 -- a signal that financial markets are losing faith in the idea of “transitory” inflation. In the U.K., price growth is heading for a rate that’s more than double the BOE’s target.

British consumers are particularly exposed as Brexit magnifies the challenges. The country’s hospitality sector is short about 500,000 workers and is facing cost inflation of as much as 18 per cent, according to the Food and Drink Federation. Wages for truckers are surging as transporting goods becomes a nightmare for U.K. grocers.

The price pressure isn’t isolated to everyday items. Used-car buyers in the U.K. are spending about a quarter more than a year ago as surging demand clashes with low availability, according to Auto Trader Group Plc. It said 17 per cent of vehicles less than a year old are more expensive than new equivalents.

Jay Rembolt, CFO of WD-40, the San Diego-based maker of industrial lubricants and cleaners, said on a conference call that the company is experiencing “significant increases” in transportation costs and fees from suppliers. It’s raising prices in response.

“We see prices staying elevated until the middle of next year before we start seeing some relief on the supply-chain front,” said Lee at BMO. “It’s a big struggle to work itself out.”