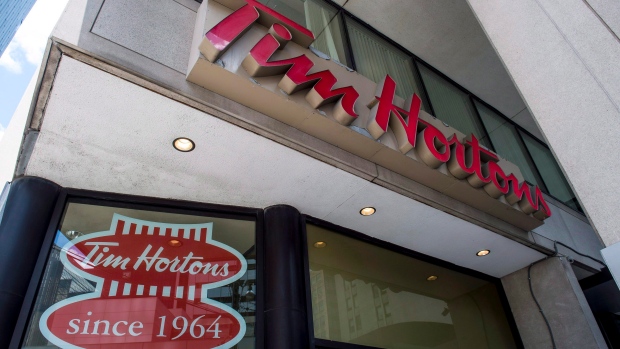 Some Canadians craving a doughnut or double-double but strapped for time can now have Tim Hortons food brought to them as the national chain started testing delivery this week.

It's one of several concepts the coffee-and-doughnut chain, working to overcome an onslaught of negative publicity, is trying out in an effort to remain relevant to Canadian consumers.

"I think we came in with a mindset that we have to listen to our guests and adapt to their changing needs," said Alex Macedo, president of Tim Hortons.

Macedo, who started in the role less than a year ago, said a slew of new hires, including Duncan Fulton, the chief corporate officer of Tim Hortons parent company Restaurant Brands International, is the reason for the brand's productivity lately.

The company hopes to expand the delivery test beyond those select cities in the coming months, said Fulton, who admits he lives his life on apps like Skip the Dishes, Uber Eats and DoorDash -- as do many Tim Hortons customers.

Delivery, he said, is something the eatery obviously needs to be doing.

It's not the only company to feel that way. Cineplex announced late last month it started offering concession stand snack delivery via Uber Eats to movie-watchers in 60 communities in Ontario, Alberta, B.C. and Quebec.

But Tim Hortons is relying on more than just delivery to garner more enthusiasm for its brand. Another change that just made sense is all-day breakfast, Macedo said.

"We're a breakfast brand and a coffee shop that also sells lunch and dinner," he said.

About 50 restaurants are now serving breakfast any time and if the test produces good results, Tim Hortons will roll out the extended first meal hours nationally before the end of the summer.

Its all-day breakfast pilot follows the national roll-out of breakfast any time by rivals McDonald's Canada and A&W last year.

It's too early for the company to announce what items will grace the kids options, but customers shouldn't expect items like chicken fingers or burgers.

"There's still a lot of other kids menu items out there ... that not everybody's embracing that could be very unique to Tim Hortons," said Fulton, who said he thinks about what his two kids would like to eat.

The loyalty program will start as a card with basic phone functionality, said Macedo, and will eventually be integrated into the company's recently launched app that allows customers to order and pay in advance.

All the changes come as the company attempts to strengthen relations with its franchisees. Continued public spats between the chain's parent company RBI and unsanctioned franchisee group The Great White North Franchisee Association over alleged mismanagement resulted in several lawsuits.

Some Ontario franchisees' decisions to cut back employee benefits and paid breaks after the province's higher minimum wage kicked in further marred the company's image, with some regulars participating in a boycott and nationwide protests.

The brand's reputation took a big hit on two reputational surveys this year, falling dozens of spots on each one.

Macedo and Fulton both acknowledged some things in the past could have been handled better, but said management has changed how it communicates with franchisees in an effort to bolster that relationship and is working with them to implement all these changes smoothly.

"I think it's just going to be a matter of time to prove out that this is a new day," said Fulton, "and there's a very sincere interest in working collaboratively with all the franchisees."