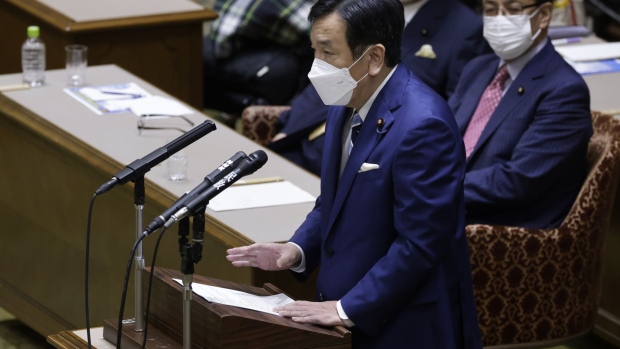 Pedestrians walk along the Shibuya River in the Shibuya district of Tokyo, Japan, on Tuesday, June 1, 2021. Tokyo’s most dramatic redevelopments ahead of the Olympic Games have been in Shibuya, largely driven by private businesses drawn to the area’s economic and cultural primacy — a major legacy of the 1964 Games. , Bloomberg

(Bloomberg) -- Foreign leaders, sponsors and even International Olympic Committee chief Thomas Bach should stay away from next month’s Tokyo Games to minimize risks from the coronavirus, the leader of Japan’s main opposition party said.

“We shouldn’t let anyone into Japan other than those who are absolutely essential for the events,” Yukio Edano, 57, head of the main opposition Constitutional Democratic Party, said in an interview with Bloomberg News on Thursday, six weeks before the Olympics are set to open on July 23. That means athletes, referees and support staff, he added.

“Leaders and President Bach can take part in the opening ceremony remotely. It’s perfectly simple in this day and age,” said Edano. Bach is scheduled to arrive in Japan July 12, Kyodo News and other Japanese media have reported.

Japan hasn’t revealed the final details of public health measures for an unprecedented global sports spectacle in the midst of the pandemic. Its vaccination program is picking up speed but still ranks among the slowest in the developed world.

Prime Minister Yoshihide Suga has expressed determination to press ahead with hosting the delayed Olympics, which he said would prove the world had defeated the virus. Recent reports have said some domestic spectators are likely to be allowed, despite concern the games could become a superspreader event.

Suga’s government is considering lifting its Covid-related state of emergency in most areas, including Tokyo and Osaka, as planned on June 20, the Mainichi newspaper reported, without saying where it got the information. Edano said the measures should be kept in place until new infections per day in Tokyo fall near 50 per day, compared with the current level of about 400.

Edano’s views echo those of the government’s top medical adviser on the pandemic, Shigeru Omi, who has called for the Olympics and Paralympics to be scaled back as much as possible, and for strong restrictions to be kept in place.

Edano also expressed opposition to the idea of holding the games while limits remain on people’s activities. Under the current emergency, bars and restaurants are banned from serving alcohol, and must close by 8 p.m., and individuals are urged to avoid unnecessary travel.

“If you hold the Olympics, people will move around, everyone will relax,” Edano said. “Unfortunately, there is sure to be an explosion of infections.”

Recent polls, however, have shown public opposition to the Olympics is fading as infection numbers fall and the vaccination program appearing to turn the corner.

The Tokyo Metropolitan Government is planning to cancel public viewings of the Olympics in the capital, perhaps using the spaces that has been allocated as vaccination centers, Jiji Press reported.

A survey by the conservative Yomiuri newspaper published June 7 found half of respondents said the Olympics should go ahead, up from 39% in a similar survey carried out by the paper last month. The proportion who said the games should be canceled dropped to 48% from 59%.

Edano said Suga could call an election as soon as next month, and that he wanted to work with other opposition parties to run a unified candidate in about 50-100 constituencies where a close race is expected against the ruling Liberal Democratic Party.

Support for Suga’s cabinet has recently slumped to its lowest levels since he took office in September amid dissatisfaction with his government’s handling of the pandemic and vaccine rollout. Opposition groups including the CDP are nonetheless struggling to pick up support, with the lower house term set to end in October.

A survey carried out by public broadcaster NHK last month found support for the CDP, the most popular opposition party, was at 5.8%, compared with 33.7% for Suga’s LDP. Some 43.8% said they didn’t support any party.