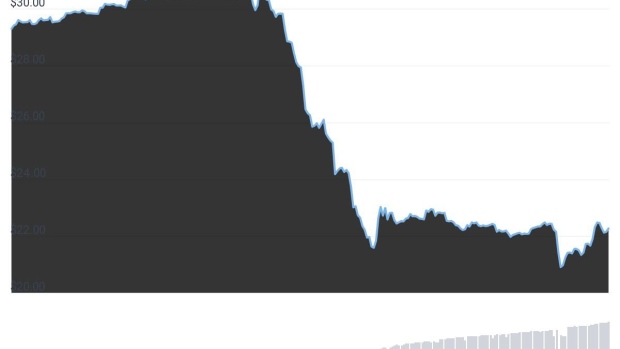 (Bloomberg) -- Tornado Cash’s token TORN fell sharply on Tuesday after the US Treasury Department imposed sanctions on the cryptocurrency mixer.

TORN was down 24% during Asian hours to $22, according to CoinGecko data. The token has lost 95% of its value since its all-time high in February 2021.

TORN is the native token of Tornado Cash, a popular cryptocurrency service which allows users to mask their transactions by mixing funds from different sources before transmitting them to the ultimate beneficiary. This feature has made it a preferred tool for hackers and criminals to launder stolen or illicitly acquired funds.

Tornado Cash was also used to launder funds stolen in the $600 million Ronin Bridge hack in March, as well as the $100 million loot from the Harmony Bridge exploit in June, according to security firms.

Data from Dune Analytics shows that around $7.6 billion have been sent through Tornado Cash since the service started in 2019. Around $1.54 billion of those funds are proceeds from criminal activity, according to forensics firm Elliptic.

In an earlier interview Roman Semenov, one of the founders of Tornado Cash, had said that it is “technically impossible” for sanctions to be enforced against decentralized protocols because of how they are designed.

In May, the US Treasury imposed sanctions on another cryptoasset mixer called Blender.