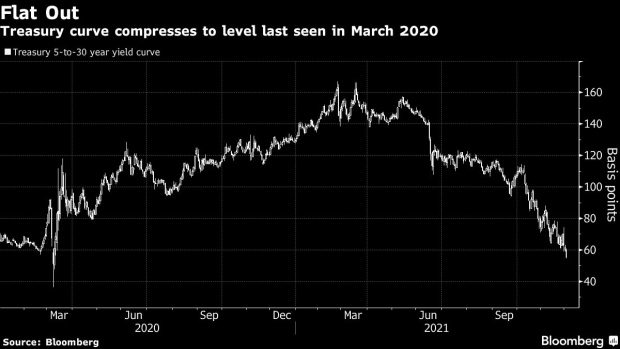 (Bloomberg) -- Treasury yields soared again after several Federal Reserve officials joined the chorus of policy makers who have endorsed the idea of winding down asset purchases at a faster pace.

Rates in the so-called belly of the curve and shorter maturities led the charge higher, with the three-year yield rising as much as 9.4 basis points to 0.911%. Two-, five- and seven-year yields also climbed at least seven basis points, while rates for longer-tenor securities rose less and U.S. stocks jumped.

The moves extend a period of extreme volatility in short-maturity Treasuries that’s been spurred by comments from central bank officials, who have indicated that to stem inflation pressures they’re willing to accelerate the wind down of bond buying and raise overnight interest rates in 2022.

The shift in front-end rates stands in contrast to action in longer-end rates which, although up in Thursday trading, have generally been under pressure of late as traders bet that the Fed can ultimately keep a lid on price pressures. The result has been a turbo-charged flattening of the yield curve, although some investors are beginning to question if it’s gone to far, too fast.

“The yield curve has been flattening as the Fed has talked tough, but it has come too far,” said Michael Kastner, principal at Halyard Asset Management. “The 30-year bond looks over-valued at these levels.”

The yield premium of the 30-year bond over the more policy sensitive five-year note on Thursday dipped to less than 55 basis points, the most compressed level since March 2020 and around 20 basis points below where it was just a few days ago. The 30-year yield itself is roughly 1.77%, up three basis points on the day but still close to the mark it hit earlier in the session that was the lowest since early January.