Justin Trudeau’s government set the table for a possible election in Canada with a budget that promises big spending on new programs such as childcare and a return to small deficits by 2025.

After running one of the largest shortfalls of any developed country last year, Finance Minister Chrystia Freeland outlined $101.4 billion (US$80.9 billion) in new policy actions over three years to aid the economic recovery. The plan includes more cash for pensioners, subsidies for businesses to rehire workers and billions for health care and infrastructure.

The nearly $500 billion budget is a bet that voters will support Trudeau and Freeland’s vision for the government to play a bigger role in the country’s economy over the long run. It’s also a wager on a recovery that features robust growth and modest inflation -- allowing for a windfall of new tax revenue and low borrowing costs.

“This budget is about finishing the fight against COVID. It’s about healing the economic wounds left by the COVID recession,” Freeland said in prepared remarks Monday. “And it’s about creating more jobs and prosperity for Canadians in the days -- and decades -- to come.”

Canada is projecting a $155 billion deficit in the current year, about 6.4 per cent of gross domestic product. That could shrink to 1.3 per cent of GDP in four years, the government said in budget documents, as revenue rises from the improving economy.

The deficit was 16.1 per cent of GDP in the fiscal year that ended March 31.

The biggest-ticket item is about $30 billion over five years to establish a national daycare system, with the goal of providing spots that cost parents $10 a day, similar to an existing system in Quebec that has been praised for encouraging more women to join the labor force. 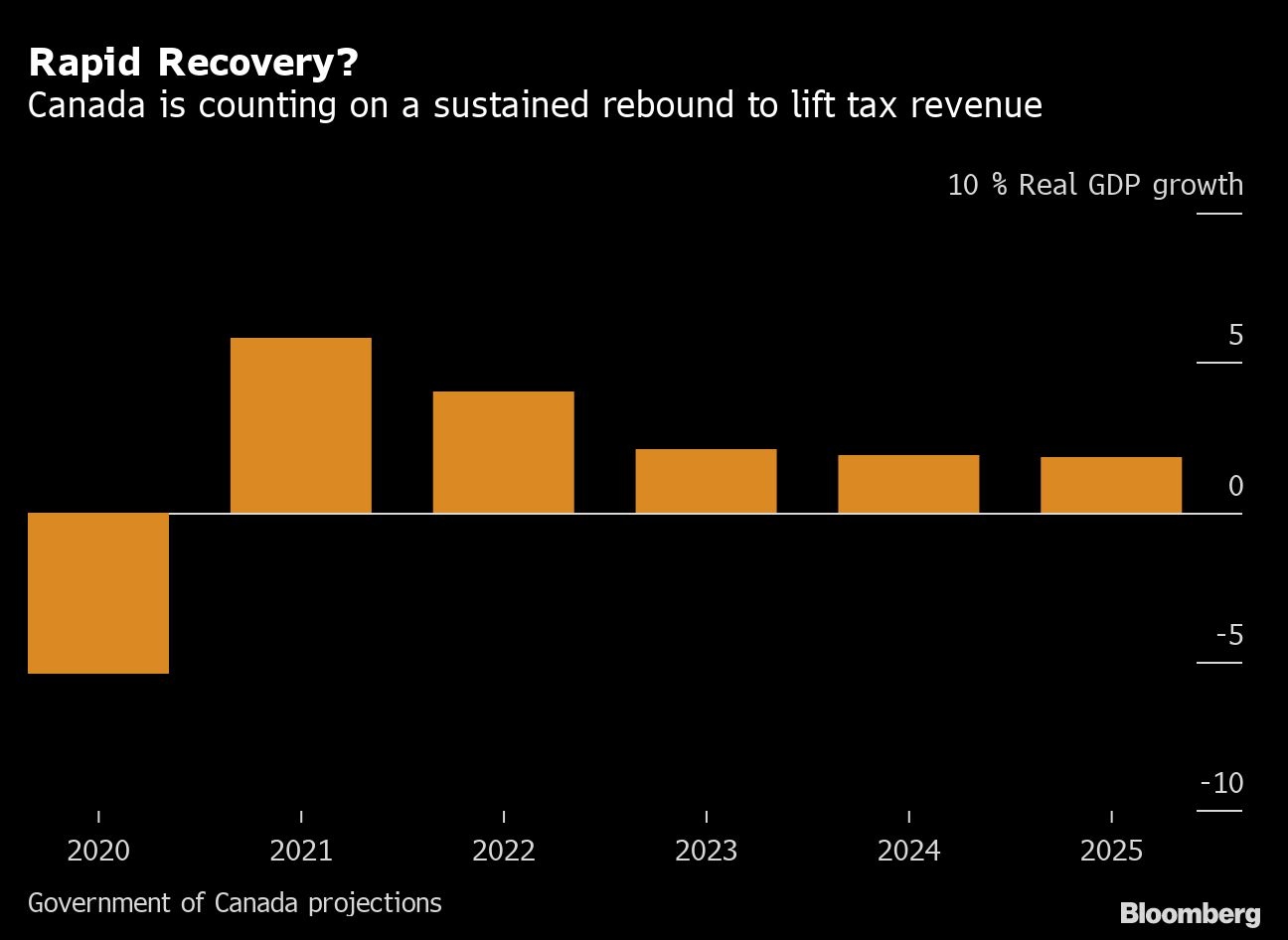 It also extends emergency help for businesses affected by the pandemic. That includes subsidies for wages and rent, which will be available until late September, and a temporary program in which the government will give companies as much as $1,129 a week to help pay for new hires.

Alongside that, the government added a few populist tax measures that won’t bring in a lot of revenue but will generate some headlines. Non-resident homeowners will face a 1 per cent tax if their property remains vacant, and a luxury tax will be levied on airplanes and cars worth over $100,000, as well as yachts.

As of 2022, some digital companies will face a 3 per cent tax on revenue from “digital services that rely on data and content contributions from Canadian users” -- a measure designed to squeeze some cash from foreign technology giants including Facebook Inc. The government thinks it can raise $3.4 billion over five years from the levy.

The budget will now face a vote in the House of Commons, where the Liberals will need the support of at least one opposition party. Failure to pass it would trigger an election.

Support is most likely to come from the left-leaning New Democratic Party under Jagmeet Singh, the fourth-largest party in the legislature. The NDP has long advocated for a national childcare strategy and a more generous paid sick leave policy, both of which are in the budget.

In catering to key voting blocs including women and seniors, Trudeau’s budget is politically tricky for his biggest rival, Erin O’Toole’s Conservative Party. Trudeau’s management of the COVID-19 crisis has helped his Liberals open up a wider lead in polls. Since the pandemic began, Canadian voters have shown a preference for sticking with what they know, re-electing incumbent governments in four provincial elections.