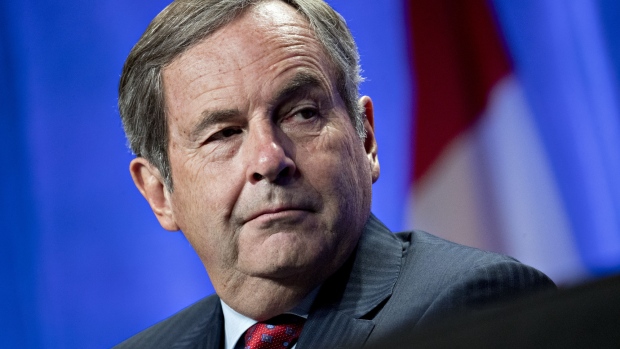 Canada’s ambassador to Washington is confident that the U.S. will both pass the revised North American trade deal and lift tariffs on steel and aluminum.

David MacNaughton, speaking to reporters Wednesday in Sherbrooke, Quebec, during a cabinet meeting, said there are “no negotiations going on” to resolve the U.S.-Canada tariff dispute but that the government of Prime Minister Justin Trudeau continues to press the U.S. to end the levies.

The tariffs, of 25 per cent on steel and 10 per cent on aluminum, were applied last year under Section 232 trade law provisions reserved for national security cases. Canada then levied its own, dollar-for-dollar tariffs. It has long pledged to cancel its tariffs when the U.S. abandons theirs.

“The 232 tariffs are illegal, they’re unjustified, to consider Canada as a national security threat is absurd, so we continue to press the Americans to drop those tariffs,” MacNaughton told reporters. “These tariffs don’t make any sense at all and I am confident that at some point in the near future, we’ll be able to get rid of them.”

Tariffs aren’t the only U.S. trade uncertainty for Canada. A new North American Free Trade Agreement for the U.S., Canada and Mexico was signed on Nov. 30, but still needs lawmakers’ approval. Democrats -- now in control of the U.S. House of Representatives -- are seeking changes, including stronger labor and environmental provisions.

“The reality is that there is a labor and environment chapter, and there is some enforceability, and there wasn’t in the old agreement,” MacNaughton said. “I’m confident that when it comes right down to it, the U.S. Congress will support this agreement, and that’s what I think is going to happen.”

The countries are calling the new deal by different names, though the Trump administration dubbed it the U.S.-Mexico-Canada Agreement, or USMCA.

MacNaughton declined to say whether he thinks President Donald Trump will follow through on a threat to give notice of quitting the current Nafta -- such a move would effectively give Congress a choice: take the new trade accord, or have none at all.

MacNaughton said he didn’t know if that would happen, but that he didn’t think it was necessary.

The new trade deal includes a cap on levels of vehicles, and vehicle parts, that Canada can sell to the U.S. tariff-free without facing another potential 232 tariff. The U.S. has been pushing for a similar type of quota on steel and aluminum. MacNaughton downplayed the likelihood of a new quota, saying the trade deal’s clause “wasn’t a quota, it was more of an insurance policy.”