Bill Morneau on 2019 budget: 'We've stayed on the fiscal approach as we promised'

Justin Trudeau got a windfall and spent it, delivering a pre-election budget that leaves Canada’s deficit track largely unchanged.

Finance Minister Bill Morneau unveiled his fourth fiscal plan Tuesday in Ottawa, announcing $22.8 billion over six years in new spending funded by a spike in revenue. In a year Trudeau had once promised to have balanced the budget, he’ll instead head into an October election with an annual deficit of nearly $20 billion.

The plan continues the hallmark of Trudeau’s fiscal policy since his 2015 election -- a reluctance to return to balance even in the face of a revenue windfall -- and the approach has supporters and critics. Cuts may undermine growth with the economy in a soft patch, but some warn the spending leaves too little room to react to any recession or shock.

Tuesday’s plan is aimed at key voting groups like seniors, students and young families. The budget is littered with pledges to support the middle class, and the wide-ranging spending measures include new funding for home buyers, infrastructure and indigenous communities.

“It’s more of a microeconomic budget,’’ said Avery Shenfeld, chief economist at the Canadian Imperial Bank of Commerce. Trudeau got billions in new revenue and “they’ve essentially allocated that money to a laundry list of items.’’

Are you more confident in Canada’s economy after the budget?

The deficit path is little changed. Canada will finish the current fiscal year with a $14.9 billion shortfall, down from $18.1 billion forecast previously. That figure included a $3 billion risk buffer, meaning the year finished in line with the government’s November estimate. The deficit is 0.7 per cent of the country’s gross domestic product, far below many other western nations. The U.S. budget deficit in 2019 is roughly 5 per cent of GDP.

Trudeau’s government will run a $19.8 billion deficit in the fiscal year that begins April 1, up slightly from the previous estimate. The following four years will have a cumulative shortfall of $56.4 billion, down slightly from the $57.2 billion forecast in the fall. The prime minister pledged in the 2015 election to balance this year’s budget, a promise he quickly abandoned. The ratio of federal debt to the economy, however, is projected to fall from 30.8 per cent in the current fiscal year to 28.6 per cent by 2023-24.

To be sure, the spending stops well short of anything that could be considered broad-based stimulus at a time when growth has stalled on an oil shock. “They saved a judgment on whether the economy has softened on a permanent basis,’’ Shenfeld said.

The new spending is being funded by $15.1 billion in new revenue, largely from personal income taxes and excise taxes. Canada’s economy has slowed recently but its job market remains strong, buoying government finances.

Trudeau’s budget makes notable changes to housing policy. It introduces a system for the country’s housing agency to help first-time buyers by taking up to a 10 per cent stake in a home, lowering the size of their mortgage. Key details of such transactions, however, remain unclear. Families that make more than $120,000 annually won’t qualify and there’s a cap on the value of homes that are eligible.

“I think the most important thing we can demonstrate to Canadians is a continued commitment to invest in their success,’’ Morneau told reporters in Ottawa on Tuesday.

The government is increasing the amount of money homebuyers can withdraw from their retirement savings for a down payment, and expands the situations in which they’re allowed to do so. The budget also sets aside $635 million over five years to spur the construction of new rental units and other housing supply. 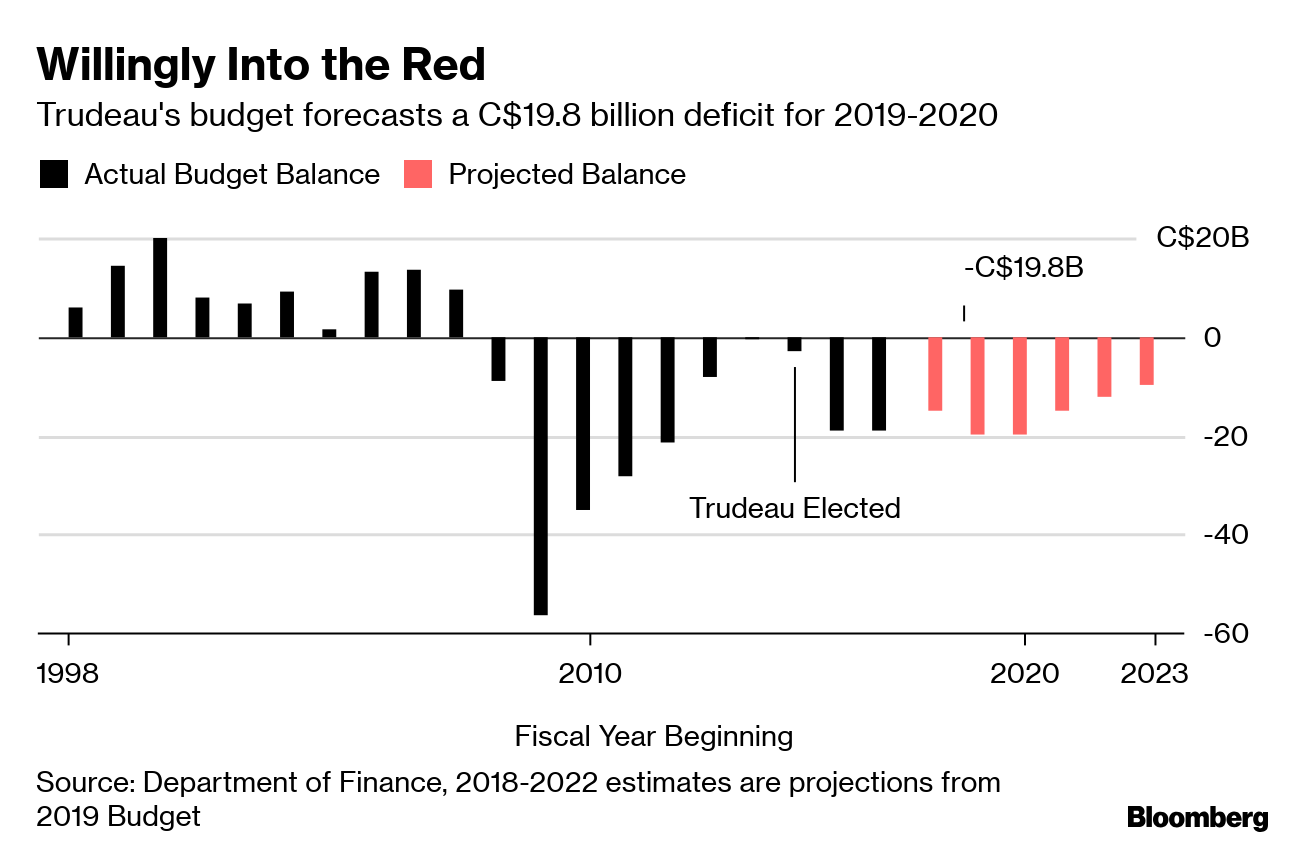