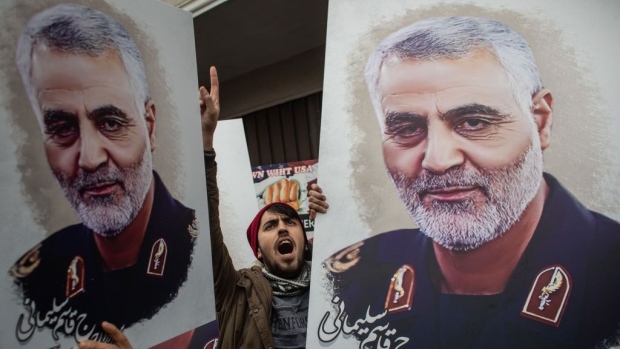 President Donald Trump acknowledged that Americans were hurt in an Iranian missile barrage to retaliate for the U.S. killing of a top general, and said the injuries were “not very serious.”

“I heard they had headaches,” Trump told reporters Wednesday during a press conference at the conclusion of a two-day trip to the World Economic Forum in Davos, Switzerland. “I can report it’s not very serious.”

Trump said he learned of the injuries among U.S. service members days after the Iranian counterstrike against U.S. bases in Iraq in retaliation for the killing of General Qassem Soleimani Jan. 3, which inflamed tensions between the U.S. and Tehran.

Trump’s comments — in response to a reporter’s question — followed a bilateral meeting earlier Wednesday with Iraqi President Barham Salih on the sidelines of the Davos summit.

Tensions in the region were largely left on the back burner during Trump’s event in Switzerland, where the U.S. president has focused on touting his economic record as counter-programming to the Senate impeachment trial that got under way in Washington this week.

Soleimani’s killing in Baghdad earlier this month prompted calls from Iraqi lawmakers for U.S. troops to leave the country, but Trump said he’d only do so if Iraq repaid construction costs related to a joint airbase. An Iranian counterstrike didn’t kill any Americans, but experts have warned about the possibility of retaliation from Iranian proxy groups.

As tensions simmer, Trump has pushed to put new pressure on Iran and called on allies to abandon the 2015 Iran nuclear deal and to send more soldiers to Iraq, after Soleimani’s death led to calls for U.S. withdrawal there. Trump’s justification for the strike has changed.