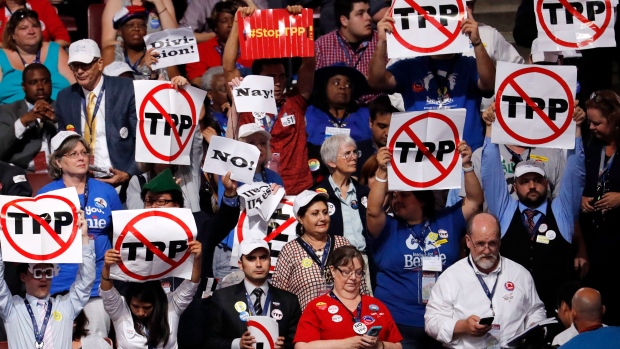 Former U.S. ambassador to Canada David Wilkins is warning the impending presidency of Donald Trump could spell trouble for the ratification of the Trans-Pacific Partnership trade agreement.

In an interview on BNN, Wilkins said American involvement in the expansive trade agreement is at risk if the current administration can’t force legislation through in its final months.

“Unless President [Barack] Obama can generate some support and get it done during the lame duck session in November and December, I think it’s probably going to wither on the vine,” he said.

However, Wilkins downplayed the risk to the existing North American Free Trade Agreement, which Trump has vowed to either rip to shreds or overhaul entirely to secure more favourable conditions for the U.S. economy.

“I think NAFTA will survive, I think NAFTA will be with us a long time. I don’t think we ought to jump to conclusions, all of a sudden the sky is falling and NAFTA’s gone,” he said. “I think once he gets in there, he’ll realize there are benefits from NAFTA.”

Allan Gotlieb, former Canadian ambassador to the U.S., also warned that significant damage could be inflicted on the already-fragile global economy if Trump tears apart NAFTA or significantly renegotiates its terms.

“There is definitely a risk of fracturing the global economy if trade agreements are torn up or if they are unilaterally altered,” Gotlieb said in an interview with BNN.

“If he implements the notion of unilaterally changing the United States’ obligations, that could be very, very counter-productive.”

“It was a good deal without any question, I think the evidence is overwhelming,” Gotlieb said. “We’ll see, now that he’s president-elect whether he moves away from this preposterous notion.”