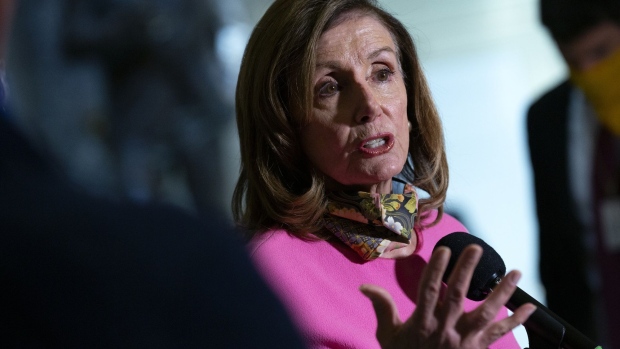 U.S. House Speaker Nancy Pelosi, a Democrat from California, speaks to members of the media following a meeting at the U.S. Capitol in Washington, D.C., U.S., on Friday, Aug. 7, 2020. No agreement on a final deal has been reached, after U.S. Treasury Secretary Steven Mnuchin told reporters an offer from Democrats to come down by $1 trillion for a stimulus deal is "a non starter." , Bloomberg

Nancy Pelosi and Donald Trump are putting down opposing wagers on where the economy is headed and who voters will blame if it goes south.

The two sides are at least US$1 trillion apart on another package of relief the U.S. economy needs to overcome the ravages of a pandemic that continues to force companies, schools and other organizations to roll back plans to reopen for business.

Pelosi, the House speaker, on Wednesday rebuffed an overture from Treasury Secretary Steven Mnuchin to resume negotiations, saying the White House refused to budge on the size of the relief plan. Mnuchin said it was Pelosi who refused to compromise.

Some of the pressure was taken off the White House to make concessions, with the stock market rallying this week even after talks collapsed and a report Thursday showing initial jobless claims fell below 1 million for the first time since the pandemic roiled the U.S. in March.

One of the biggest sticking points is aid to state and local governments. Democrats offered to cut their original US$3.5 trillion proposal by about a third but insisted on keeping almost US$1 trillion for governments outside Washington. The Trump administration and congressional Republicans say state and local officials have been given enough help and offered to add US$150 billion more for such aid than was in their original roughly US$1 trillion proposal.

As much as the money, the argument is about how the country will fare in the months ahead, particularly in the 82 days until the election that will decide control of the White House and Congress.

“They don’t think the economy is going to open up, and we do,” Mnuchin said Wednesday on the Fox Business Network.

Pelosi and Senate Democratic Leader Chuck Schumer repeatedly point out that the House passed its rescue package in May, while Republicans held back on making their own proposal until the end of July as Covid-19 cases soared across the American South and West, forcing many businesses to retrench.

“We have again made clear to the administration that we are willing to resume negotiations once they start to take this process seriously,” the two Democratic leaders said in a statement Wednesday.

In his own statement, Mnuchin said that it was Pelosi who was unwilling to negotiate “unless we agreed in advance to her proposal, costing at least US$2 trillion.”

Trump Wednesday ridiculed the Democrats’ proposals as “ridiculous” and filled with radical provisions that “no one in their right mind would approve.”

Where Washington sees a stalemate, Wall Street apparently envisions an eventual deal. The S&P 500 on Wednesday briefly surpassed the record peak reached before the coronavirus outbreak, only stumbling briefly as Democrats suggested the negotiations were in jeopardy. U.S. stocks were mixed at the open on Friday.

“We’ve got a market that’s focused on the good case outcome for the virus, we’ve got a market that has taken a great deal of comfort in that fiscal policy is going to be there to support an economy through tough times,” Kevin Caron, portfolio manager for Washington Crossing, said.

Trump, as he has since the country first started shutting down in March, continues to tout an “incredible” economic rebound, though economists and Federal Reserve officials warn that the country still needs a substantial fiscal infusion.

Chief White House economic adviser Larry Kudlow echoed that optimism on Wednesday, saying he didn’t think failing to strike a deal on a broader legislative package would hurt the economy.

“I think the economy is doing great right now,” Kudlow said, describing a “boom” in housing, manufacturing, and automobile sectors.

Still, the total number of Americans claiming ongoing benefits in state programs was at 15.5 million in the week ended Aug. 1, data showed Thursday. That was a decline from the previous reading, but well above the highs reached during the last economic downturn.

The economy is key for Trump. It’s the one area that polls have consistently shown him ahead of Democrat Joe Biden. Over the weekend, the president used executive authority to extend extra unemployment aid and defer payroll taxes. While economists say the impact will be modest, his re-election campaign is counting on a bigger political bump.

While GOP polling shows that even employed voters are anxious about the economy – and concerned that a prolonged pandemic could eventually hurt their personal finances – the data also show Americans are eager to see a president who seems in charge, according to a Republican official who requested anonymity to describe internal conclusions. There’s no sign Republicans should feel pressure to give in to Democrats on a stimulus, the person said.

And G. William Hoagland, a senior vice president of the Bipartisan Policy Center and a former senior Republican Senate aide, doesn’t see any deal happening until after Labor Day if the stock market stays strong. The Sept. 30 deadline to pass a stopgap spending bill will become the key deadline, Hoagland said, adding that neither the Republicans nor the Democrats would be likely to risk a government shutdown a month before the election.

Recent public polling shows voters assign blame equally to both parties for the standoff. And Congress continues to have lower approval ratings than Trump.

Economic data have the potential to be a game-changer. Recent figures, including on manufacturing, have shown a bounce-back, but numbers for August could alter the narrative both in Washington and on Wall Street. Most forecasters are expecting economic growth to slow sharply in the fourth quarter following a solid rebound in the third quarter.

Pelosi and Schumer warn that the nation is still careening toward a cliff and that the poor and the unemployed, along with local and state governments, need a massive amount of help.

“It is clear that the administration still does not grasp the magnitude of the problems that American families are facing,” they said in their statement.

They are gambling that voters will credit Democrats for proposing more money months ago and blame the GOP for any state and local layoffs, local tax hikes and service cutbacks while they hold out for a bigger deal.

Despite expressions of confidence from Republicans, voters historically lay blame or bestow credit on the president for the state of the economy near Election Day. If the calculation by Pelosi and Schumer is right, there will be building pressure on Trump. By extension, that also will apply to congressional Republicans, who are already divided on how much, or even whether, additional stimulus is needed.