Beijing pledged to respond if the U.S. insists on adding extra tariffs to the remainder of Chinese imports, after President Donald Trump’s abrupt escalation of the trade war.

Trump announced Thursday that he would impose a 10 per cent tariff on a further US$300 billion in Chinese imports, a move set to hit American consumers more directly than any other in his trade wars so far. The new import taxes, which Trump later said could go “well beyond” 25 per cent, will be imposed beginning Sept. 1 on a long list of goods expected to include smart-phones, laptop computers and children’s clothing.

“If the U.S. is going to implement the additional tariffs, China will have to take necessary countermeasures,” Foreign Ministry spokeswoman Hua Chunying said at a regular briefing in Beijing on Friday. She didn’t elaborate on what the measures would be.

“China won’t accept any maximum pressure, threat, or blackmailing, and won’t compromise at all on major principle matters,” Hua said.

Our representatives have just returned from China where they had constructive talks having to do with a future Trade Deal. We thought we had a deal with China three months ago, but sadly, China decided to re-negotiate the deal prior to signing. More recently, China agreed to...

...during the talks the U.S. will start, on September 1st, putting a small additional Tariff of 10% on the remaining 300 Billion Dollars of goods and products coming from China into our Country. This does not include the 250 Billion Dollars already Tariffed at 25%...

The threat to tax practically all U.S. imports from China marks the biggest escalation so far taken by the Trump administration and brings a surprise end to a truce that had only been in place since the president met Xi Jinping, his Chinese counterpart, in Osaka at the end of June.

“Imposing new tariffs is absolutely not the right solution to trade frictions,” he told a local Chinese television station while attending an Asean meeting in Bangkok.

The Stoxx Europe 600 index slumped at the open in a catch-up move to benchmarks on Wall Street and in Asia. The Japanese yen climbed 0.4 per cent to 106.96 per dollar, the strongest in almost 16 months. 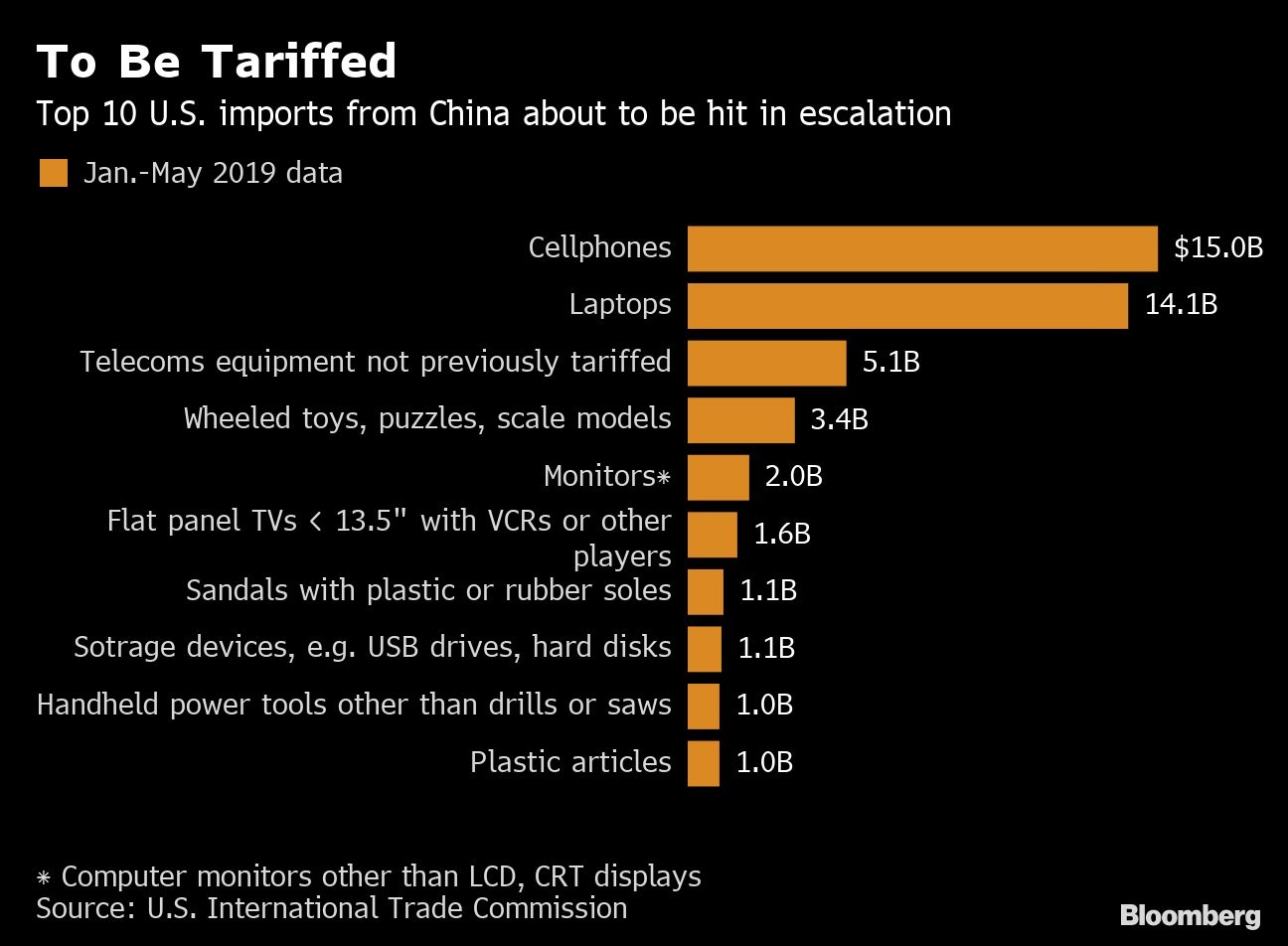 China’s response to the escalation is complicated by the fact that the Communist Party’s top leadership is likely decamping this week to the seaside resort of Beidaihe for their annual two-week policy conclave. Officials from Xi downward disappear from public view as they privately debate policy.

Analysts see China now as being less likely to try to match Trump’s tariffs dollar-for-dollar, but instead hunker down.

“For the Chinese, Trump is losing his last bit of credibility here, and whether the talks can be held in September as scheduled has been put into question,” said Zhou Xiaoming, a former Commerce Ministry official and diplomat. “Deal or no deal, China is prepared for the worst-case scenario.”

In a tweet, Trump said China had not lived up to a promise Xi made in Osaka to buy U.S. agricultural goods and to halt illegal exports of fentanyl. The president later told reporters he’s “not concerned at all” about the negative reaction from markets.

“I think they want to try and make a deal with us, but I’m not sure,” Trump said in a Thursday evening rally in Cincinnati. “Until such time that there is a deal, we will be taxing the hell out of China.”

Six people familiar with the discussions said that during meetings with U.S. Trade Representative Robert Lighthizer and Treasury Secretary Steven Mnuchin in Shanghai earlier this week the Chinese side had also made no new proposals. That had left the way out of an impasse in talks over the substance of a deal that the two sides hit in May unclear, which prompted the administration to decide to increase pressure further on Beijing at a White House meeting Thursday.

Trump said there were no plans to reverse a decision made in Osaka to allow more sales by U.S. suppliers of non-sensitive products to blacklisted Chinese telecoms giant Huawei Technologies Co.

Trump in a series of tweets announcing the new tariffs left the door open to further talks.

“We look forward to continuing our positive dialog with China on a comprehensive Trade Deal, and feel that the future between our two countries will be a very bright one!” he said. Later, speaking to reporters as he departed the White House for the campaign rally, he complained that Xi isn’t “going fast enough.”

Both China and the U.S. said after this week’s talks that their negotiators would regroup in Washington in early September. People close to the administration said they were still planning for those talks to go ahead.

“Assuming Trump’s tweet becomes policy, we’d expect a proportionate reaction from China. That would mean more tariffs on imports from the U.S. We don’t think China would shoot itself in the foot with harassment of U.S. firms or sales of U.S. Treasuries.”

But they also said the president and his advisers had grown increasingly wary of what appeared to be China’s efforts to extend the talks into next year with an eye toward a possible change of administration after the 2020 presidential elections. That feeling, they said, had only grown since Osaka on the back of China’s failure to live up to its promise to ramp up agricultural purchases and the outcome of the Shanghai meeting appeared to confirm that.

China has insisted that it wants to see all tariffs lifted as part of a deal. But according to one person familiar with the discussions, Chinese negotiators in Shanghai insisted that levies would have to be lifted before they would deliver on any reforms, something the U.S. has said it would not commit to.

Trump rejected the advice of Mnuchin and ruled out giving Beijing advance notice of the tariffs during a White House meeting shortly before announcing the move in a tweet.

The tariff move drew an immediate angry response from a U.S. business community that has been pushing for Trump to end a trade war that they see as increasingly weighing on the U.S. and global economies.

The U.S. Trade Representative’s Office said it will release the final, official list of products to receive the higher taxes in the coming days.

Analysts said the decision to walk away from the Osaka truce indicated a level of desperation by an administration whose efforts to force China to commit to economic reforms were going nowhere.

U.S. officials reported to Trump that Chinese negotiators refused to commit to to improving intellectual-property laws, cracking down on fentanyl trafficking, or buying more from American farmers until a comprehensive and binding trade deal is sealed, according to several people briefed on the matter.

Trump’s “trade war with China has failed and he is doubling down on a failing strategy,” said Edward Alden, a senior fellow at the Council on Foreign Relations. “The whole purpose of the tariffs was to force China to make structural changes to its economy. But the tariffs have failed to do that. China is prepared to live with the pain rather than make the changes the U.S. wants.”

Victor Shih, a China expert at the University of California San Diego, said if the tariffs were imposed as threatened, Beijing would find new ways to respond.

“If this were to go into effect, China almost certainly will retaliate in some fashion,” Shih said. “The soft delays and suspension in purchasing Boeing aircraft may harden into official policy. Also, China may impose fines and restrictions over services vendors with large presence in Greater China.”