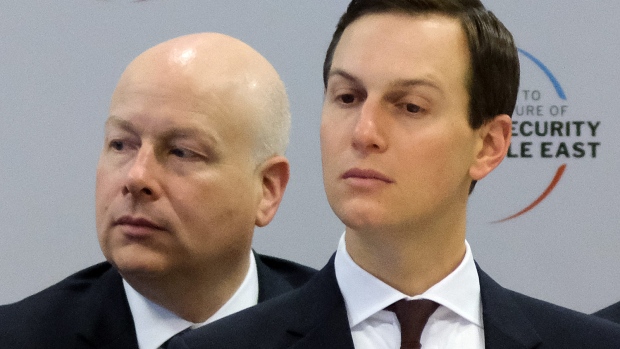 (Bloomberg Opinion) -- American envoys charged with negotiating a peace between Israel and the Palestinians typically leave their posts after months or years of fruitless negotiations. Not Jason Greenblatt, who has the distinction of leaving before negotiations have even started.

Part of the reason is that this particular peace process has been a long tease. Ever since President Donald Trump bloviated in 2017 about the “deal of the century,” there has been lots of speculation and almost no details. To date, the only thing put forward by Trump’s son-in-law and senior adviser Jared Kushner is an elaborate promise of investment and development for Palestinians on the condition that they make peace with Israel.

That said, it may be a mistake to read too much into Greenblatt’s departure. White House officials tell me he only signed up for two years to promote the Trump peace plan. What’s more, Kushner and his team have completed their statement of “political vision,” but will not unveil it until Israel has a new government following this month’s elections. So the tease continues.

I have no doubt that there is such a document. The problem is that neither the Israelis nor the Palestinians are ready to talk. In the 1990s, when Middle East peace negotiations really mattered, there were moments where one could have said the same thing. Nonetheless, there were negotiations and interim agreements.

A big difference between then and now is that the incentives have changed for Israel. After the end of the Cold War, Israel’s only hope for recognition from most of its Arab neighbors — Egypt and Jordan excepted — was a two-state solution. Now the Gulf monarchies are in a regional struggle with Iran, so Israel has developed quiet but robust security relationships with countries like Saudi Arabia and the United Arab Emirates. The promise of normalization is steadily being achieved with no end in sight to the conflict with the Palestinians.

Add to this the rest of the Trump administration’s Israel policy. The president has moved the U.S. embassy to Jerusalem, recognized Israel’s sovereignty over the Golan Heights and accepted a new Israeli policy to attack Iran and its proxies throughout the Levant, most recently in Iraq. Past U.S. presidents have usually offered benefits to Israel in exchange for concessions in the peace process.

Another reason peace is not around the corner is that there is no Palestinian leader at the moment with the democratic credibility to negotiate it even if he were so inclined. Gaza remains under the sovereignty of Hamas, which rejects any Jewish state. The Palestinian Authority — which ostensibly governs the West Bank — meanwhile is run by the 83-year-old Mahmoud Abbas, who is currently serving the 14th year of a four-year term as president of the Palestinian Authority.

Abbas has negotiated before with Israeli leaders. But he has never been able to get to a deal. Even if he did, there is little reason to believe most Palestinians would accept it. A recent poll conducted by the Aman Coalition found that 91 percent of Palestinians said they do not trust the Palestinian Authority. Given that, noted Ghaith al-Omari, a senior fellow at the Washington Institute for Near East Policy, it’s difficult to see how its leaders will have the legitimacy to make any concessions.

Privately, U.S. officials who have worked on the Trump peace plan acknowledge this problem. They understand that there will have to be governance and anti-corruption reform for a future Palestinian state to be viable. By unveiling his economic program before his political document, Kushner hopes to create public pressure on Palestinian leaders.

Kushner and his team are not the first American diplomats to grasp this problem. The administration of George W. Bush promoted Abbas initially as an alternative to the late Yasser Arafat precisely because they saw him as someone who would promote reform as well as peace. The difference between the Bush and Trump approach is that Bush also pressed Abbas to stand for an election. How could Abbas make peace on behalf of the Palestinian people if he did not have a democratic mandate?

The results have been tragic. Every few years there is a small war between Israel and Gaza. There have been no real peace negotiations, despite the best efforts from U.S. presidents. Meanwhile, both Hamas and Fatah have enriched themselves at the expense of the people they are supposed to govern.

It’s quite possible, of course, that Palestinians could vote for new leaders who choose war over peace. But that’s not a good reason to oppose Palestinian elections. Think of it this way: Half of the Palestinian leadership rejects peace. The other half is corrupt and powerless. The best way to improve this state of affairs is to give Palestinians the chance — on a regular basis — to elect new leaders who not only want peace but are capable of delivering it.

To contact the author of this story: Eli Lake at elake1@bloomberg.net