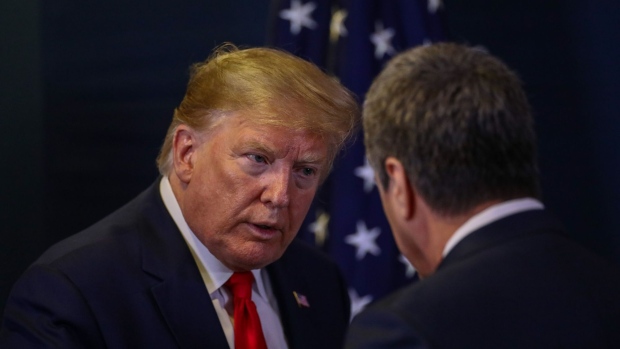 President Donald Trump threatened to withdraw the U.S. from the World Trade Organization during a contentious phone call with the group’s then-leader, according to a new book by journalist Bob Woodward.

Trump demanded that Roberto Azevedo, who was the WTO’s director-general, designate the U.S. a “developing nation” like China and India in order to get more favorable trading terms, Trump told Woodward in a Jan. 22 interview.

Bloomberg News obtained the book ahead of its Sept. 15 release.

Azevedo resigned from his position in May, well before his term was set to end in 2021. He said leaving early was the “best thing for me, my family and the organization,” adding that the group’s work had ground to a halt.

The appointment of judges to the WTO’s appeals panel ground to a halt in December after the U.S. blocked all nominations and allowed the terms of existing members to expire, hampering the body’s ability to resolve trade disputes.

Trump has repeatedly threatened to withdraw from the WTO, blasting the international body as the “single worst trade deal ever made.” But Woodward’s book provides new details about the president’s willingness to use extreme leverage against friend and foe alike in search of trade deals.

During a private meeting about tariffs in 2017, the president mused about removing tens of thousands of American soldiers from South Korea, arguing the country was taking advantage of the U.S., according to Woodward’s reporting. Later, Trump told trade adviser Peter Navarro he needed to take charge of steel negotiations, saying that his trade advisers were weak.

In a Feb. 7 phone call with Woodward, Trump boasted that he was “breaking China’s ass on trade” and, by imposing steep tariffs on Chinese exports, forced Beijing’s annual gross domestic product growth rate to turn negative. The claim about China’s GDP is not supported by most economists.

The president also told Woodward that the European Union had been “formed to screw the United States” and added that he had planned to take it on after completing trade agreements with China, Canada and Mexico. “I don’t want to be fighting every country in the world at the same time,” Trump said.

Woodward’s book caused a new political headache for Trump on Wednesday after CNN and the Washington Post reported passages in which the president said he intentionally downplayed the threat of the coronavirus in order to avoid scaring Americans. Trump made the determination even though he said he knew the virus was deadly and could be spread through the air in early February, more than a month before the U.S. imposed social-distancing measures designed to slow the spread.

Trump told reporters Thursday that he “didn’t lie” to the American public about the severity of the coronavirus.

“What I went out and said is very simple: I want to show a level of confidence,” Trump said, adding that he wanted to assure the public that the country would “be fine one way or the other.”

“I don’t want to jump up and down and start screaming, ‘death, death,’” he said.

Trump’s first reaction upon meeting Kim in Singapore in 2018 was “holy s---,” he later told Woodward. Trump said in an interview with the author that Kim is “beyond smart.”

Trump said Kim “tells me everything,” including how he had his uncle killed and then had his dismembered body displayed in public. “Think that’s tough? You know, they think politics in this country’s tough,” Trump said to Woodward.

Woodward also published the contents of a number of letters Kim sent to Trump, which flattered the president and spoke highly of their summits. Kim repeatedly referred to Trump as “your excellency.”

In one letter around Christmas 2018, Kim wrote about how during their Singapore summit he “firmly held your excellency’s hand at the beautiful and sacred location as the whole world watched,” a scene that was “reminiscent of a fantasy film.”

Trump has maintained close ties with the monarchy’s de facto leader, even after the CIA reportedly concluded that Prince Mohammed was behind Khashoggi’s killing. Trump told Woodward that he believed the crown prince’s denials that he was involved in Khashoggi’s murder because the Saudi leader had promised his country would do hundreds of billions of dollars of business in the U.S.

“He says very strongly that he didn’t do it,” Trump said. “Bob, they spent $400 billion over a fairly short period of time.”

Woodward cited an Associated Press fact check that could not substantiate the supposed Saudi investments.