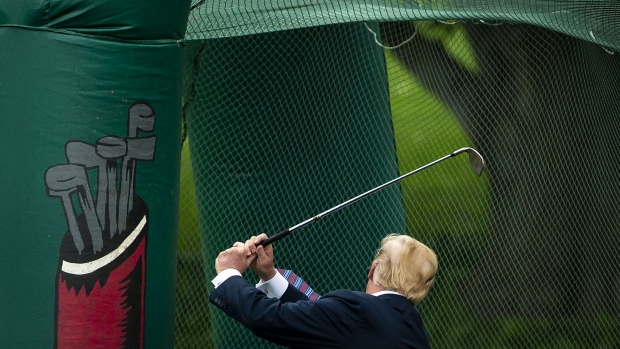 U.S. President Donald Trump swings a golf club during the White House Sports and Fitness Day event on the South Lawn of the White House in Washington, D.C., May 30, 2018. Bloomberg/Al Drago

Donald Trump’s Doral golf resort in Miami will be the site of next year’s Group of Seven summit, the White House said on Thursday, a decision that will reignite claims he’s violating a constitutional prohibition against profiting from the presidency.

The announcement by Acting Chief of Staff Mick Mulvaney came as the president is facing an impeachment inquiry in the House. Trump has been attacking rival presidential candidate Joe Biden, saying that when he was vice-president, he used his position to further his son Hunter’s business interests.

“It’s almost like they build this facility to host this type of event,” Mulvaney told reporters at the White House, saying “a lot of the same criteria” used for past summits were applied to choosing the site. He said the president “will not be profiting here.”

The president pitched hosting the 2020 G7 summit at Trump National Doral at this year’s August gathering of leaders in Biarritz, France, saying that the luxury property is “very big” and that each country could “have their own villa, or their own bungalow.”

After Trump’s comments in August, the House Judiciary Committee said it would investigate the proposed site selection as part of its ongoing probe to determine whether to bring articles of impeachment against the president.

Judiciary Chairman Jerrold Nadler at the time said hosting the G7 at Doral would violate the Constitution’s ban on foreign “emoluments” to a president, and said doing so would reflect “perhaps the first publicly known instance in which foreign governments would be required to pay President Trump’s private businesses in order to conduct business with the United States.”

Trump’s decision to maintain his varied private business holdings while in office has drawn criticism from ethics experts and led to several lawsuits. Trump has said he’s likely losing billions of dollars by serving as president.

Trump’s business, the Trump Organization, has sought to counter criticism by donating profit from foreign leaders’ visits to the U.S. Treasury, which his critics say is an unenforceable commitment that doesn’t resolve the constitutional issue.

Even if the Trump Organization turns over profit from the G7, Doral would benefit in other ways from hosting a summit of world leaders. The resort would get free publicity that could boost future profit.