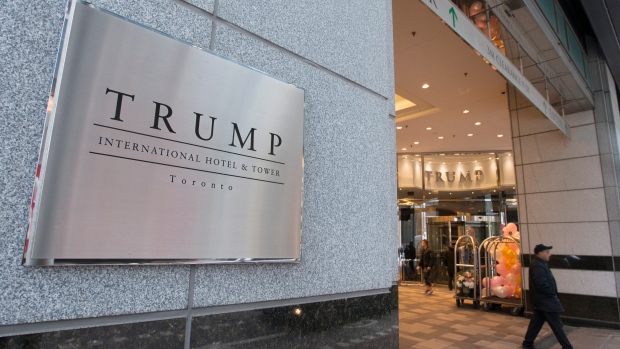 TORONTO -- The new owner of Toronto's Trump International Hotel and Tower has struck a deal that will see the U.S. president's name removed from the property.

JCF Capital says it has reached an agreement with a unit of the Trump Organization to buy out the management contracts for the property for an undisclosed amount.

While U.S. President Donald Trump never owned the building, his Trump Organization licensed his name to and operated the property, which has struggled financially and been the focus of a long-running legal battle after opening in 2012. 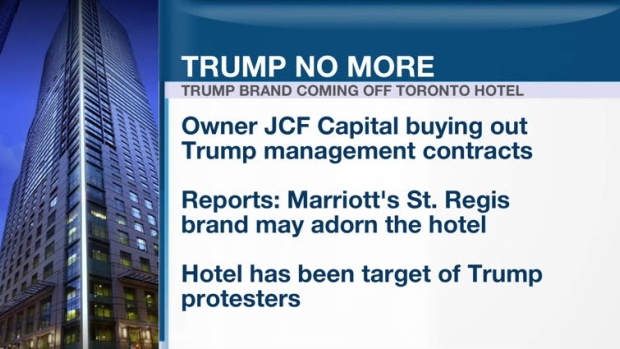 "We are pleased to have reached this agreement with JCF and have enjoyed our relationship with them as the new owners of this property," Trump Hotels CEO Eric Danziger said in a statement. "This was a record setting year for the hotel and we are incredibly proud of our performance. We look forward to the possibility of exploring other opportunities with JCF in the near future."

Trump-branded properties, including a recently opened tower in Vancouver, have been the target of protesters angry about the U.S. president's policies.

Representatives of both JCF and the Trump Organization said their relationship has been good and they may work again together in the future.

"Collectively, Donald Trump Jr., Eric Trump, Eric Danziger and their team have been exceptional partners and we hope to have the pleasure of working with the Trump Organization again in the future," Jay Wolf, JCF Capital's president, said in a statement.

The 65-storey Toronto tower was built by developer Alex Schnaider, who formed the original business relationship with the Trump Organization.

His company, Talon International, later defaulted on a loan from an Austrian bank, which sold the loan to JCF Capital.

JCF, a joint venture between Juniper Capital Partners and Cowie Capital Partners, was the successful bidder for the property's 211 hotel units, 74 residential units and most of its commercial, retail and amenity space. An Ontario judge approved JCF's bid of C$298-million to acquire the property in late March.

Last October, an Ontario court ruled in favour of investors who had launched a lawsuit alleging they were misled when they bought units in the residential portion of the tower. The investors scored another victory in March when Canada's highest court refused to hear an appeal of the ruling.