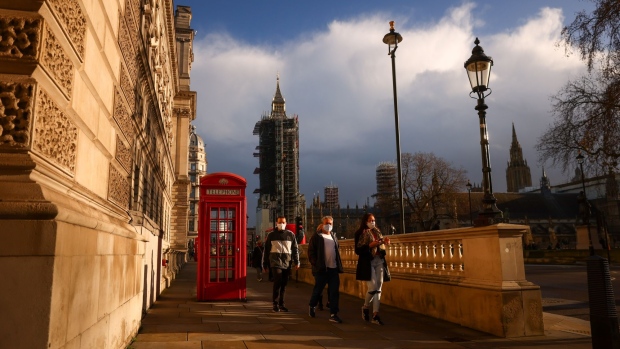 Chefs work in an empty restaurant in Covent Garden, after the capital was placed into tier 3 coronavirus restrictions, in London, U.K., on Wednesday, Dec. 16, 2020. The switch to tier 3 rules from tier 2 in London and parts of southeast England will see pubs, bars and restaurants closed, except for serving takeaway meals. , Bloomberg

Furloughed workers will receive 80% of their wages from the state until the end of April, a month-long extension to the measures, Chancellor of the Exchequer Rishi Sunak said. Business loan programs, which have already provided 68 billion pounds ($92 billion) in government-backed lending, will continue until the end of March instead of ending in January.

The extra economic support came on the same day the government announced the tightening of pandemic restrictions across large parts of densely populated southeast England, where infections increased by 46% in the last week.

From Saturday, more than 38 million people -- some 68% of England’s population -- will be in areas placed in “tier 3,” the toughest level of government virus rules.

The curbs are another big blow to the hospitality industry ahead of Christmas, as tier 3 means pubs, restaurants, bars and indoor entertainment venues must close. In an effort to provide some relief, Sunak said the government will provide state backed financing for businesses affected for longer.

“We know the premium businesses place on certainty, so it is right that we enable them to plan ahead regardless of the path the virus takes,” he said.

The chancellor is trying to support British businesses after the pandemic pushed the economy into its deepest recession since the Great Frost of 1709. The U.K.’s planned departure from its Brexit transition period on Dec. 31 has added uncertainty to the effects of virus restrictions on domestic trade.

Extending the furlough and loan programs is the latest example of the coordinated response the Treasury and Bank of England have deployed during the crisis. Earlier Thursday, the central bank extended its own loan program to help lending to the real economy, running it an extra six months until October.

Dan Hanson of Bloomberg Economics put the cost of the furlough extension at between 3 billion and 4 billion pounds. That will take the net cost of furlough to almost 60 billion pounds, based on estimates from the Office for Budget Responsibility, with help for self-employed workers adding a further 17 billion pounds to government borrowing.

The vast scale of government borrowing has prompted questions over how and when Sunak intends to start paying off the debts. He will set out his fiscal plans in the budget on March 3.

That statement “will deliver the next phase of our plan to support our recovery from coronavirus and protect jobs,” Sunak wrote on Twitter. Forecasts for the economic outlook from the Office for Budget Responsibility will be published at the same time.

Government spending to support workers and businesses through the pandemic has driven the national debt above 2 trillion pounds for the first time on record, exceeding the size of the economy for the first time since the 1960s. Sunak said it’s “clearly not sustainable” to borrow at such a high level once the pandemic has passed and has indicated hard choices lie ahead to rein in the deficit.

The extension of the furlough will give workers and companies certainty they will be supported a month more as the pandemic continues to hamper the economy.

By pushing the end of furlough to well beyond the budget date, Sunak is giving firms time to assess any extra measures announced on March 3 before making decisions on job cuts.

He has previously been criticized for leaving businesses in the dark on changes to coronavirus support until the eleventh hour. That was particularly the case with the previous extension of furlough, which came just hours before the support was due to expire.

With the U.K. becoming the first western country to begin rolling out vaccines last week, ministers have said they hope life can begin returning to normal by spring.

Sunak had previously said he would review the proportion of furlough payments made by the government in January. But on Thursday he said the state will continue to pay 80% of wages until the program ends. That means the government will have been providing 80% of furloughed workers wages for 11 of the plan’s 13 months.

The chancellor is also devising plans for a new state-backed loan guarantee system to replace the coronavirus programs when they eventually expire. He has pledged to outline a new loan program in January.

The bounce back program in particular has attracted criticism because it was designed to get the loans out fast and as a result fewer checks were carried out on the borrowers. The House of Commons Public Accounts Committee said on Wednesday the taxpayer may be on the hook for about 26 billion pounds of loans that may never be repaid because of fraud or because companies can’t afford to do so.