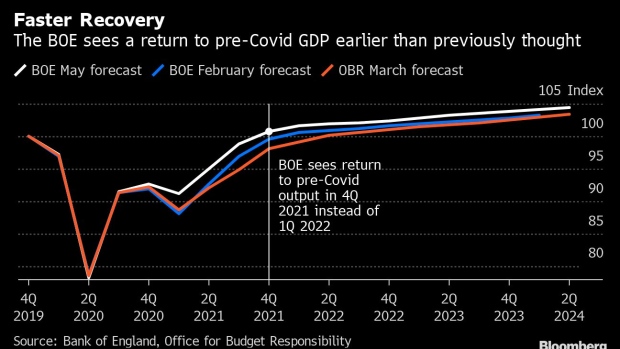 (Bloomberg) -- The U.K. economy gathered momentum in April as shops, hairdressers and restaurants serving outdoors re-opened for business after months of lockdown to fight the coronavirus.Gross domestic product rose 2.3% from March, despite unexpected declines in manufacturing and construction, the Office for National Statistics said Friday. The gain left output just 3.7% below its level in February last year before the pandemic struck.The figures are likely to fuel speculation about when the Bank of England might tighten interest rates. A rapid vaccination program means the economy, which shrank the most since 1709 last year, is now set for its strongest growth in decades. Surveys indicate businesses are preparing to step up investment and households are splurging savings built up during more than a year of restrictions.BOE Chief Economist Andy Haldane, who cast a lone vote last month for the central bank to scale back its stimulus program, this week said inflation could remain above the 2% target for longer than many assume. His colleague Gertjan Vlieghe says policy makers could raise the benchmark rate as early as next year if the labor market recovers smoothly when the government’s furlough support ends in September.

The expansion in April was the fastest in nine months, and the economy received a further boost in May with the reopening of the indoor hospitality and entertainment sector. Prime Minister Boris Johnson is expected to delay the final stage of lockdown easing that had been planned for June 21 due to the spread of the highly transmissible Covid-19 variant first identified in India.