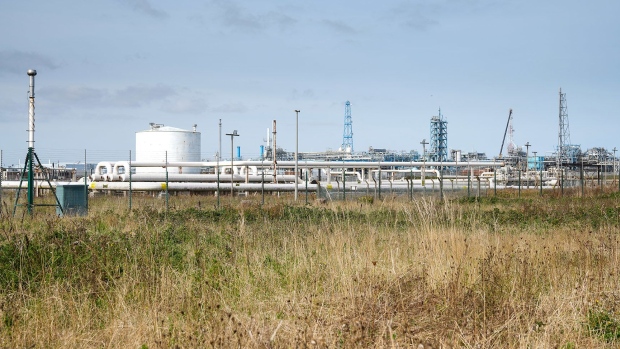 A general view of the Easington Gas Terminal on the Yorkshire coast on September 21, 2021 in Easington, England. , Photographer: Christopher Furlong/Getty Images

(Bloomberg) -- The dramatic exit from the U.K. gas market of a middleman that supplies the fuel to utilities is already reverberating through the industry.

Xcel Power Ltd., a small retailer to businesses, warned Thursday it’s likely to fold after the company it buys gas from -- CNG Group Ltd. -- said it would stop supplying the fuel. It’s the latest escalation in a crisis rocking the industry, with weeks of record prices already pushing more than a dozen suppliers out of business.

“It’s not worth carrying on now,” Zafar Nicod, who runs Xcel in Derby, England, said in an interview. He estimates he’d need to stump up 500,000 pounds ($685,000) in collateral to continue trading and then secure a new shipper, which would probably mean higher prices.

Wholesaler CNG provides gas typically to smaller utilities who then sell it on to retail customers. Its exit threatens to prompt a raft of further failures among suppliers, with the knock-on effect that small businesses like manufacturers, nursing homes and restaurants will face higher costs for their gas.

The government has been in and out of emergency talks as the energy crunch worsens. Daligas Ltd. collapsed on Thursday after two other suppliers with about 250,000 customers folded the previous day, taking the total number of households forced to switch provider to about 2 million since early August. The larger utilities obliged to take on those accounts are finding it’s an increasingly unprofitable proposition.

Benchmark gas prices have more than quadrupled this year as supply has failed to keep up with rebounding demand. The crisis has rippled through multiple industries, from fertilizers to glass and ceramics, forcing some producers to shutter plants or curtail output.

Glencore Plc-backed CNG has advised its clients to seek alternative shipping arrangements “quickly.” The company said it still had about 18 utilities on its books that would need a new supplier. CNG is also reviewing options for its business-to-business retail arm, with roughly 45,000 customers, which may include the sale of those accounts.

The U.K. had more than 70 energy suppliers at its peak after rules were relaxed for new entrants in a bid to lessen the influence of the six biggest firms. But many of the smaller companies didn’t have the cash to hedge the energy they needed, making them more vulnerable to price shocks.