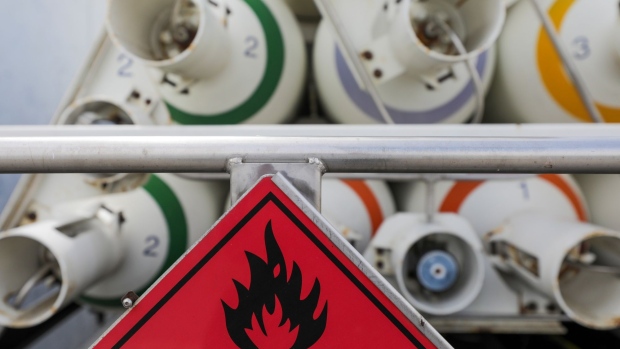 A sign warns of flammable chemicals near tanks of hydrogen at the hydrogen electrolysis plant at Energiepark Mainz, operated by Linde AG, in Mainz, Germany, on Friday, July 17, 2020. Europe is pinning its green hopes on hydrogen in a plan that sees hundreds of billions of euros in investment flowing into the clean technology and fueling a climate-friendly economic recovery. Photographer: Alex Kraus/Bloomberg , Bloomberg

(Bloomberg) -- The U.K. government is starting to draw up a plan to create a “world-leading” hydrogen market that can help meet its goal to zero out greenhouse gas emissions by 2050.

Business Secretary Alok Sharma told members of parliament that his department was drawing up a detailed strategy that would be published early next year, setting out a pathway for driving investment in the clean fuel. The forthcoming energy white paper would also include plans for hydrogen, he said.

The U.K. risks falling behind in the global race to scale up hydrogen, which is seen as key to slashing harmful emissions in everything from industry to transport and heating homes.

The European Union has put it at the heart of its green recovery plan while the French government has earmarked 7 billion euros ($8.3 billion) this decade to support green hydrogen development. Germany announced a larger 9 billion-euro plan as part of its green recovery efforts. Outside of Europe, Japan and Australia are pushing the fuel as key to their future energy mix.

To meet its goal to hit climate neutrality by 2050, the U.K. would need to scale up hydrogen capacity to about 270 terawatt-hours from as much as 27-terawatt-hours today, said Julian Critchlow, Director General for Energy Transformation and Clean Growth at the Department for Business Energy and Industrial Strategy.

He said the government was working with industry on a detailed plan that would top other countries.

“Far from being behind we believe that we’re actually putting the detailed and specific policy levers in place to be able to deliver a world leading hydrogen market,” Critchlow said.

He added that the forthcoming strategy would look at scaling up the supply of hydrogen through the use of carbon capture and storage technology as well as its uses in heavy duty transport like buses, and in boilers to heat homes and offices.