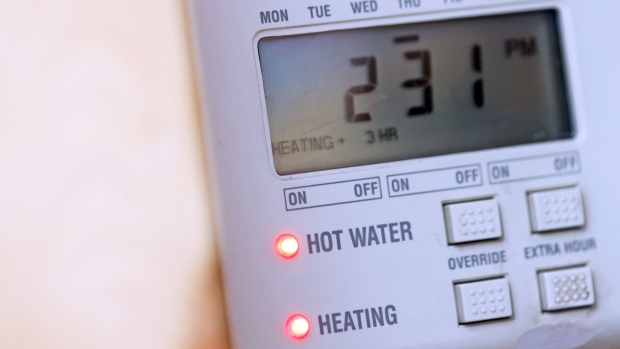 A hot water and heating control panel inside a customer's home in Danbury, U.K., on Thursday, Oct. 21, 2021.. European energy prices soared to fresh records amid worsening fears over supply, with U.K. natural gas futures exceeding the threshold of 300 pence a therm for the first time ever. Photographer: Chris Ratcliffe/Bloomberg , Bloomberg

The U.K. government will probably wait until March to announce measures to help consumers facing record bills amid the nation’s worst energy crisis in decades.

Chancellor Rishi Sunak is due to give an outlook for the economy and public finances in his Spring Statement on March 23. It would be “unusual” for any aid to be announced by the Treasury ahead of that, Business Secretary Kwasi Kwarteng said on BBC radio on Friday.

Record wholesale prices for power and gas in the second half of last year means that the nation’s price cap, which limits the amount suppliers can charge the majority of customers, is set to rise by about 50% in April. Regulator Ofgem will announce the exact level on Feb. 7. Ministers have met with industry leaders to find ways to ease the pain of millions of households.

“I’m confident there will be some way we’re going to try and ease the burden,” Kwarteng said.

Emma Pinchbeck, chief executive officer of EnergyUK, which represents the biggest suppliers, said on Thursday it would be “untenable” if the government won’t do something to help consumers.