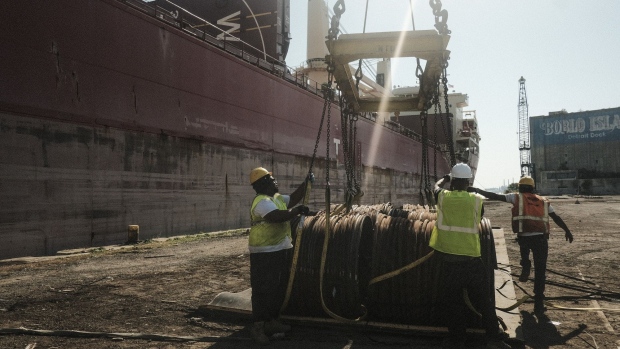 Workers unload bar-in-coil steel from a freight ship in the dockyard at the Port of Detroit in Detroit, Michigan, U.S., on Monday, Sept. 27, 2021. The U.S. Census Bureau is scheduled to release trade balance figures on October 5. Photographer: Matthew Hatcher/Bloomberg , Bloomberg

(Bloomberg) -- U.K. Trade Secretary Anne-Marie Trevelyan will press U.S. Commerce Secretary Gina Raimondo on Tuesday to remove Trump-era tariffs on British steel and aluminum after the U.S. struck a deal with the European Union in October to remove their levies.

“We’ve already made strong progress; from getting British beef and lamb back on U.S. plates, to lowering the cost of Scotch whisky exports by addressing the long-running Airbus-Boeing issue,” Trevelyan said in a statement. “Now is the time to hit the ground running and get on with boosting ties with our closest ally.”

The tariffs are a headache for Prime Minister Boris Johnson, who pitched an improvement in trading relations with the U.S. as one of the major benefits of exiting the European Union. Johnson has shelved ambitions for a bilateral deal after recognizing U.S. President Joe Biden’s concentration on his domestic agenda.

Instead Trevelyan’s three-day visit to the U.S. will focus on securing state-by-state trade deals. Her junior, Trade Minister Penny Mordaunt, will this week visit California, Georgia, South Carolina, Tennessee and Oklahoma to press the case.

But it’s the discussions over steel and aluminum tariffs that will draw the most attention.

Last week the Financial Times cited a communication from a U.S. Department of Commerce official who expressed concerns about British threats to trigger Article 16, the mechanism for unilaterally suspending the part of the Brexit divorce deal that covers Northern Ireland trading arrangements. In response, the British government accused the U.S. of conflating the issues of Brexit and trade.

The U.S. is the U.K.’s largest single trading partner, with total trade reaching 201 billion pounds ($266 billion) in the year ended June 2021, according to British government figures.

Trevelyan will meet investors in New York City to promote the U.K. on Monday, traveling to Washington on Tuesday to meet U.S. Trade Representative Katherine Tai and members of Congress and then to see Raimondo.

Johnson is also set to unveil draft legislation for his so-called leveling up agenda, driving power and investment out to British regions in coming months.

Underlining how the agenda could rely on foreign investment, the Department for International Trade released statistics showing U.S. businesses employed almost 1.5 million people in the U.K. in 2019 with 60% of those jobs outside of London and the southeast.