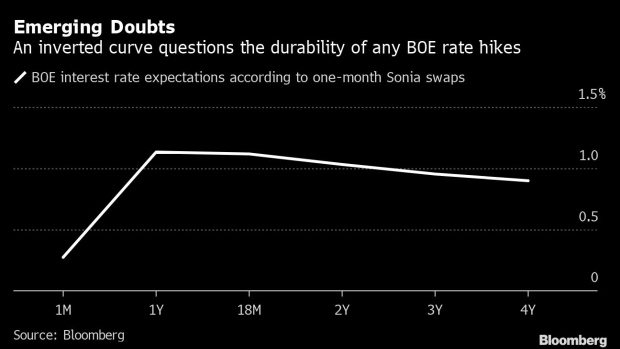 The U.K. rates market is signaling that the Bank of England may have to rapidly undo any policy tightening it delivers over the next year and a half.

Inverted curves occur when shorter-term rates climb above longer-term ones, which is interpreted by some as a sign of an impending economic slump. This was seen in the sterling overnight index swaps curve, which saw an accelerated repricing this week to bet on about 110 basis points of rate hikes over the next year. That would take the BOE rate to around 1.20% by the end of next year.

Yet traders are wagering that the increases will peak in 12 to 18 months, and will soon be followed by a series of cuts to bring the key rate back below 1% by 2025.

The inversion indicates doubts that the BOE will be able to maintain the rapid rate hikes that traders expect it to deliver, especially with the nascent U.K. economic recovery likely to be threatened if both fiscal and monetary support are withdrawn simultaneously.

“The market is telling us that the BOE may be able to go fast, but that in doing so it may damage the U.K. recovery in a way which makes it impossible for rates hikes to persist after the first year,” said Dominic Bunning, HSBC Holdings Plc head of European FX research.

This may also explain why the pound has struggled to fully capitalize on accelerated rate-hike expectations, and could be “a sign of a potential policy error of hiking into supply-driven economic slowdown,” Bunning added.

Read More: Currency Traders Are Betting the BOE Is About to Make a Mistake

Money-market prices for the next year or so have consistently moved further and faster than economists’ expectations for BOE tightening. Part of this reflects the slowness of analysts to react relative to traders, but also to how accurate a relatively illiquid swaps market is as a gauge of investor expectations.

Technical factors are at play, with the rapid repricing prompting value-at-risk shocks that in turn extended the pressure. A rush of fixed-rate mortgage lenders hedging their books for potential BOE hikes creates a momentum “no-one in their right mind wants to stand in the way of,” according to John Wraith, head of U.K. and European rates strategy at UBS Group AG.

“You get a very thin market on the offer side and a massive amount of fixed-rate paying, which all pushes rates way above the consensus expectation of where the Bank Rate will actually be in a year’s time,” he said, noting this can be seen through swap rates rising faster than gilt yields. “We need the dust to settle and that may not happen for a while yet.”

Front-end rates are also being derailed by doubts over how firmly the BOE might respond to inflation and how high terminal rates could go.

“My own view is that the recovery we are seeing is very much predicated on low rates being sustained,” said Stuart Cole, head macro economist at Equiti Capital and a former BOE official. “As soon as the BOE thinks CPI is back on a downwards trend then I expect it will be eager to cut rates again.”