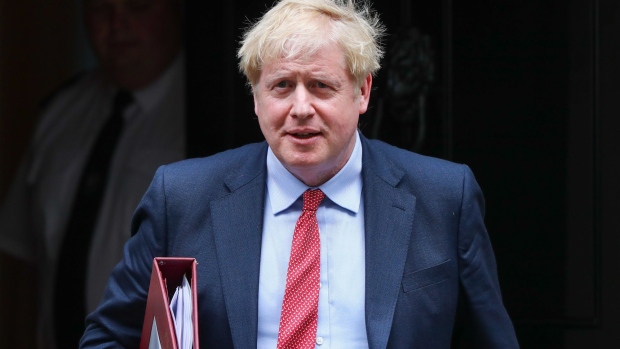 Boris Johnson, U.K. prime minister, departs from number 10 Downing Street to attend a weekly questions and answers session in Parliament in London, U.K., on Wednesday, July 8, 2020. Sunak is set to unveil a 2 billion-pound ($2.5 billion) program to pay the wages of more than 200,000 young workers as he tries to pull the U.K. economy out of the deepest slump in centuries. , Bloomberg

Prime Minister Boris Johnson’s most senior security advisers will meet on Tuesday to decide on Huawei Technologies Co’s future in the U.K., as officials draw up plans to cut the company out of fifth generation mobile networks.

According to people familiar with the matter, the National Security Council is due to assess the findings of a review which concluded new U.S. sanctions mean Huawei will have to use untrusted technology, making 5G security risks impossible to control.

Culture Secretary Oliver Dowden has promised to update Parliament on the final decision and could make a statement in the House of Commons immediately after the NSC meeting on July 14.

“We have to protect our critical national infrastructure,” Johnson said in a Facebook question-and-answer session produced by his office on Friday. “There is a particular issue that is now caused by the U.S. sanctions on the chips. We’ll have to find a way of addressing that.”

A crackdown on Huawei would further escalate tensions between London and Beijing, which are already under strain over China’s new security law for Hong Kong and the handling of the coronavirus pandemic.

Even though China has warned Johnson of repercussions, the British government is planning to speed up the removal of Huawei’s kit from emerging networks. Officials have started work on a blueprint to start phasing out the company’s equipment from 5G as soon as this year.

If the NSC confirms this course of action, it would mark a reversal by Johnson’s administration, which in January cleared Huawei to participate in the U.K.’s 5G networks, despite pressure from U.S. President Donald Trump to ban the company.

Until now, Johnson had proposed to allow Huawei to play a part in the development of 5G, subject to strict conditions including a 35 per cent cap on its involvement and a bar on its gear being used in parts of networks deemed sensitive. Ministers had said the U.K. needed diversity in its suppliers, and any risks involved in using Chinese equipment could be mitigated.

But the decision was opposed by Trump’s administration, which wanted Johnson to impose an outright ban on the Shenzhen-based tech giant, citing concerns that its equipment could be vulnerable to infiltration by Chinese spies, something the company has always denied.

The U.K. prime minister also faced growing opposition from politicians within his own Conservative Party who voiced security concerns.

The U.S. imposed new sanctions on Huawei which put its microchip supply in jeopardy and prompted Britain’s National Cyber Security Centre to begin a fresh review of the company’s role.

Defence Secretary Ben Wallace told members of Parliament on June 30 that U.S. sanctions are intended “to make 5G designed by Huawei very hard to do.” Culture Secretary Dowden said the sanctions were “likely to have an impact on the viability of Huawei as a provider for the 5G network.”

During a recent call with reporters, Victor Zhang, a Huawei vice president, said the U.K. should not be “hasty” in making a decision, adding U.S. sanctions are “completely unjustified.”

“The restrictions by the US administration will take months to fully understand,” he said. “The fact is, it is too early to assess their long-term impact. This means it is also premature to make a considered judgment on our ability to deliver next generation connectivity across the U.K.”

The British government has already said Huawei should not be part of the U.K.’s 5G networks in the long term and officials were seeking to involve alternative vendors, including South Korea’s Samsung Electronics Co. and Japan’s NEC Corp.

--With assistance from Thomas Seal and Joe Mayes.