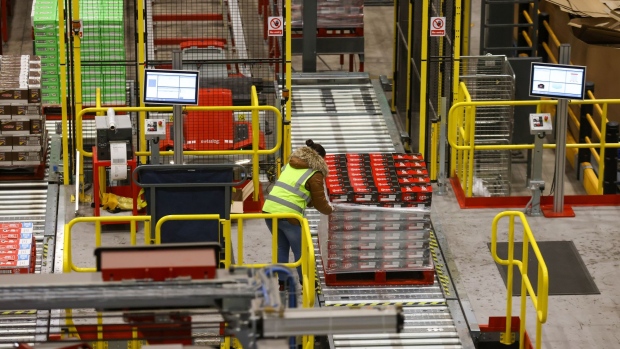 An employee wraps a pallet of KitKat chocolate bars, manufactured by Nestle SA, at a distribution warehouse operated by GXO Logistics Inc. near Derby, U.K., on Friday, Dec. 10, 2021. British logistics companies are taking steps to boost training, recruitment and pay, "yet there remains concern that some supply chain disruption will continue in 2022 until these crucial roles are filled across the industry," a report by trade organization Logistics UK warned. , Bloomberg

A 1970s-style wage-price spiral is unlikely to materialize in the U.K., according to research by Goldman Sachs Group Inc.

While wages are set to grow strongly in 2022, faster than the Bank of England is currently projecting, the “available evidence does not seem to suggest firms’ elevated expectations of selling price pressures are reflecting pressures from pay settlements,” Goldman economist Nikola Dacic wrote in a note to clients on Thursday.

It comes after a lawmakers cautioned that Prime Minister Boris Johnson’s calls for higher wage growth, if not accompanied by increases in productivity, risk contributing to a situation where wages and prices chase each other higher. BOE Governor Andrew Bailey, too, warned last week that mounting wage pressures heightened the chance of such a situation.

Dacic said Goldman’s analysis supported the case for the BOE to keep tightening monetary policy this year, including at its February meeting. Money markets are now expecting four rate rises this year from the U.K.’s central bank.

Still, with consumer-price growth reaching a 30-year high in December and expected to peak in April, Dacic said policy makers should keep an eye on longer-term expectations of price growth and pay settlements through the inflation surge.