Airline stocks surged on Friday after carriers rushed to add flights for July.

American Airlines jumped as much as 36 per cent, adding to a record 41 per cent gain on Thursday after an executive touted a bullish outlook for consumers returning to the skies. Its five-day winning streak is on track to be the longest since January, before fears of the oncoming pandemic seized the market. United Airlines Holdings Inc. which presented a more tempered outlook than rival American surged 25 per cent and is having five-session run of its own.

Spirit Airlines Inc. and JetBlue Airways Corp. also rallied on Friday trading in New York and are poised to add to yesterday’s 21 per cent and 16 per cent respective gains. 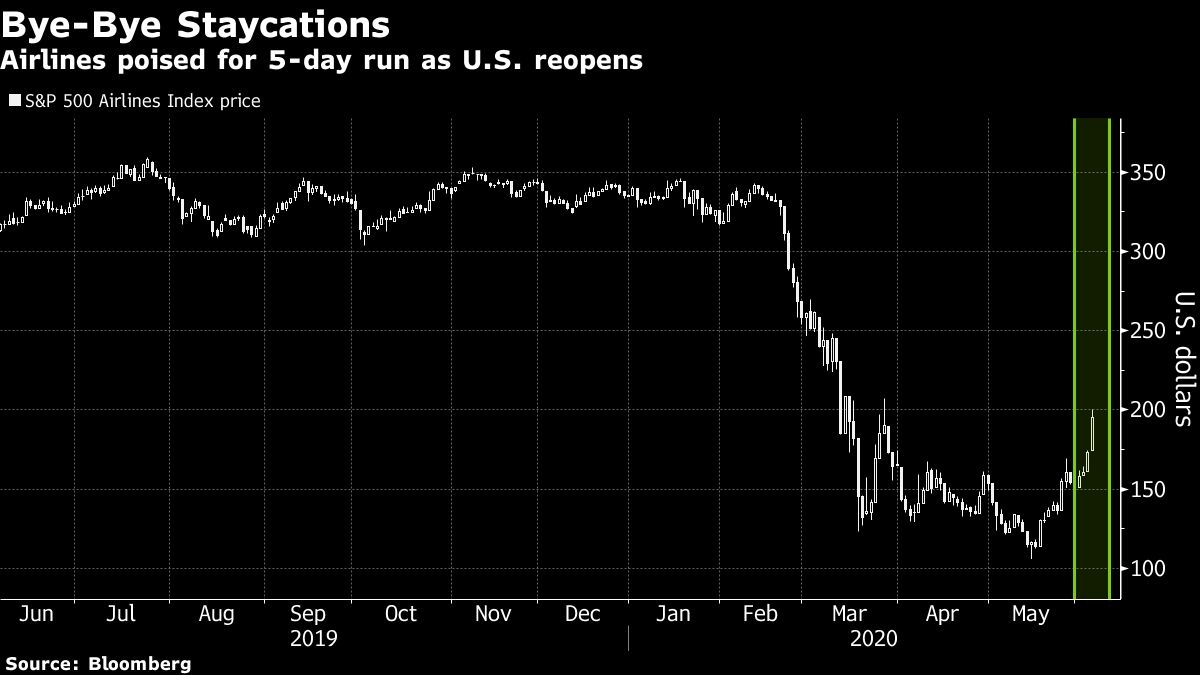 American’s red-hot advance “reflects the elimination of bankruptcy fears” as investors mull the potential for a faster recovery while a short squeeze could also be further pushing the stock higher, Raymond James analyst Savanthi Syth wrote in a note.

About 35 per cent of American shares available for trading are currently sold short with the US$2.4 billion in bets against the company among the largest for airline peers, data from financial analytics firm S3 Partners show. Bearish bets in Spirit make up 40 per cent of the float while United’s is a more tame 12 per cent.

American is “priced close to perfection” which may mean an equity raise is in the works, Syth said in the research note cutting the rating to underperform from market perform. News for American is likely to remain positive in the near-term as leisure travel makes a summer recovery and before investors shift their focus to fourth-quarter risks like a second wave of the pandemic, Syth said.

The S&P 500 Airlines Index, which is mostly made up of Southwest Airlines Co. and Delta Air Lines Inc., has rebounded by more than 88 per cent from a mid-May bottom. Still, the group is down more than 36 per cent this year.

The enthusiasm for airline stocks is spurring massive inflows in the exchange-traded fund market. The US Global Jets exchange-traded fund, ticker JETS, soared past US$1 billion in assets this week after holding just US$33 million in early March. The once-niche ETF, whose top holdings are the four biggest U.S. air carriers, posted its 66th consecutive day of inflows on Thursday, according to data compiled by Bloomberg.

Planemaker Boeing Co. jumped as much as 11 per cent as U.S. hiring rebounded faster than expected in May.

--With assistance from Katherine Greifeld.