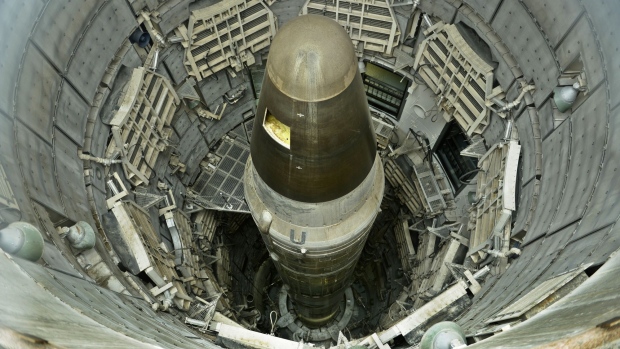 The U.S. and Russia will send senior officials to Vienna on June 22 for a new round of arms-control talks, a State Department official said, as the Trump administration tries to enlist Moscow’s help bringing China into broader negotiations to limit all three countries’ nuclear weapons stockpiles.

The official didn’t rule out that the U.S. may be willing to extend the Obama-era New Start nuclear-weapons treaty, which is set to expire in February, provided Russia commits to three-way arms control with China and helps to bring a resistant Beijing to the table.

The administration has invited China to the talks in Vienna, though its attendance isn’t a precondition, according to the official, who spoke on condition of anonymity about diplomatic exchanges.

Even a willingness to consider a New Start extension marks a concession by the Trump administration, which had previously rebuffed Russian calls to open such talks. The 10-year-old treaty, the last one capping the nuclear forces of the former Cold War foes, has an option to renew for a further five years with the agreement of both parties.

Some arms control experts have said they feared the administration was going to let the treaty expire unless it extracted a concrete commitment from China to participate in broader talks. But officials in Beijing have so far balked at trilateral talks, arguing that they are far behind Moscow and Washington, which together hold more than 90 per cent of the world’s nuclear weapons.

At this month’s meeting, the U.S. will be represented by Marshall Billingslea, the special presidential envoy for arms control, while Russian Deputy Foreign Minister Sergey Ryabkov will represent President Vladimir Putin’s government, the official said. It’s too early to discuss how long any New Start extension might last, according to the official.

It will be Billingslea’s first meeting with a Russian official to discuss arms control and suggests the Trump administration has softened its stance on extending New Start.

Billingslea has also been nominated as undersecretary of state for arms control and international security, but Republicans put that on hold until they get answers on the firing of the State Department inspector general.

The official said the U.S. reserves the right to walk away from talks at any time, is still determined to pursue broader negotiations that include China and still wants a vastly expanded arms control regime with far more robust verification measures. The official declined to say what that might encompass.

Billingslea indicated previously that the U.S. has a list of demands on Russia as well as China for a broader arms control agreement. That would include getting Russia to agree to stricter verification measures along with a major new demand: that any future arms-control regime has to include all nuclear weapons, not just strategic warheads.

Trump administration officials have insisted on China joining the talks because they believe that while the country has far fewer nuclear arms than the U.S. and Russia, it is in the middle of what they call a major buildup of nuclear weapons.

“China needs to be a part of this -- stop hiding behind the Great Wall of Secrecy,” Billingslea wrote in a tweet on May 21. “Seeking great power status means assuming great power responsibility. No secretive, unconstrained nuclear buildup.”

Billingslea said the U.S. wants to avoid a new arms race though he signaled the U.S. wouldn’t shrink from one if no agreements are reached, according to remarks he made to the Hudson Institute last month.

“We know how to win these races, and we know how to spend the adversary into oblivion,” Billingslea said. “If we have to, we will, but we sure would like to avoid it.”