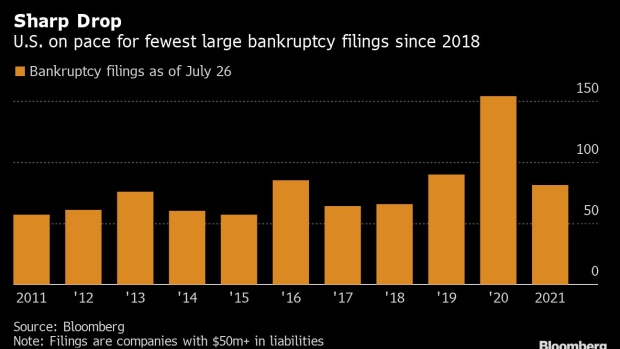 (Bloomberg) -- The number of large U.S. bankruptcy filings is being suppressed in part by debt exchanges that often amount to short-term financial bandages, according to Jordana Renert of law firm Lowenstein Sandler.

No large companies filed for bankruptcy in the U.S. last week, data compiled by Bloomberg show. That’s the second week-long drought this year, which is on pace to be the slowest since 2018 in terms of bankruptcy filings that include at least $50 million of liabilities.

Some of that slowness can be traced to the use of so-called distressed exchanges, which usually involve a creditor taking a haircut on debt in exchange for a better claim on a troubled borrower’s assets, a later maturity date, or both. Since the third quarter of 2020, distressed exchanges -- rather than bankruptcy filings or missed payments -- have “dominated” corporate defaults, according to a July 15 note from S&P Global Credit Markets Research.

“It’s sort of like putting a Band-Aid on the situation for now,” Renert said of distressed exchanges. “It improves short-term liquidity and reduces debt but doesn’t really fix a company’s problems.” It also gives lenders receiving a higher position in the capital stack “the ability to foreclose down the road,” she said in an interview.

Inflation, rising rates, and a third round of Covid-19 could all spur “a massive wave of bankruptcies,” at some point, but “I don’t think anybody can tell you when at this point,” Renert said.

There were 195 distressed bonds from 104 issuers trading as of Monday, up from 172 and 97, respectively, about one week earlier, according to Trace data.

Diamond Sports Group LLC had the most distressed debt of issuers that hadn’t filed for bankruptcy as of July 23, data compiled by Bloomberg show. Its parent company, Sinclair Broadcast Group Inc., said in a March filing that it expects Diamond to have enough cash for the next 12 months if the pandemic doesn’t get worse.