The strong inflation environment is going to be with us for a while: Wells Fargo's Sarah House

Prices paid by U.S. consumers surged in June by the most since 2008, topping all forecasts and testing the Federal Reserve’s commitment to sticking with ultra-easy monetary support for the economy.

The consumer price index jumped 0.9 per cent in June and 5.4 per cent from the same month last year, according to Labor Department data released Tuesday. Excluding the volatile food and energy components, the so-called core CPI rose 4.5 per cent from June 2020, the largest advance since November 1991. 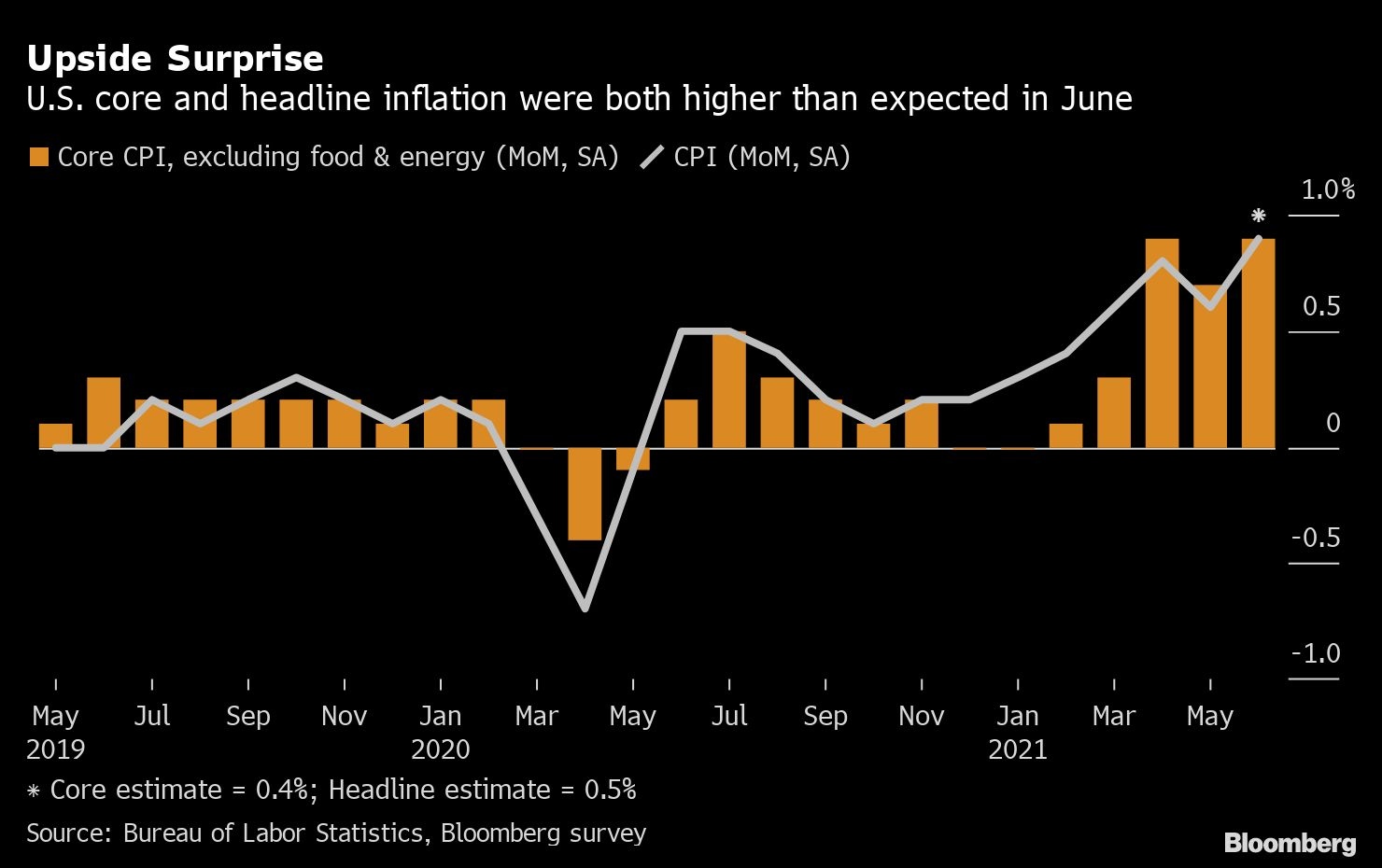 Used vehicles accounted for more than a third of the gain in the CPI, the agency said. The outsize increase was also driven in large part by the pricing rebound in categories associated with a broader reopening of the economy including hotel stays, car rentals, apparel and airfares.

Expectations that those increases will normalize help explain the Fed’s view that inflation is transitory.

“Inflation surprised substantially to the upside in June but, once again, owing to outsized increases in prices in a few categories,” said Michelle Meyer, head of U.S. economics at Bank of America. “This reinforces the idea of transitory inflation.”

In the bond market, however, some investors saw the data as putting more pressure on the Fed. The Treasury yield curve flattened as the above-forecast reading emboldened traders to bet that the central bank will tighten policy in early 2023.

With inflation, from the Fed “we are told the story is transitory but the increases are going faster and for longer,” John Ryding, chief economic adviser at Brean Capital said on Bloomberg Television. “We just had a monthly increase that was about double what was expected.”

The median forecasts in a Bloomberg survey of economists called for a 0.5 per cent gain in the overall CPI from the prior month and a 4.9 per cent year-over-year increase. The S&P 500 declined after the report.

The report also may add to challenges for the Biden administration in getting Congress to approve trillions of dollars of additional fiscal spending in coming years. Republicans have been highlighting the jump in inflation as a reason to reject such new plans.

A White House official said the report was consistent with the administration’s view that the spike in inflation is related to post-reopening bottlenecks in economy.

The year-over-year figures have shown outsize gains in recent months partly because of so-called base effects -- the CPI retreated from March through May of last year during the pandemic lockdowns. While the annual figures are expected to peak, it’s not yet clear how much moderation will occur over the coming months.

In the three months through June, the core CPI increased at a more than 8 per cent annualized rate, the fastest since the early 1980s.

Household spending on merchandise, fueled in part by government stimulus, has left businesses scrambling to fill orders while facing shortages of materials and labor. That dynamic is contributing to higher costs, which often feed through to consumer prices.

Meanwhile, the lifting of pandemic restrictions is propelling purchases of services like travel and transportation, another contributor to inflationary pressures.

Prices paid for new and used vehicles rose from a month earlier by the most on record., That said, those categories each make up less than 4 per cent of the overall CPI. 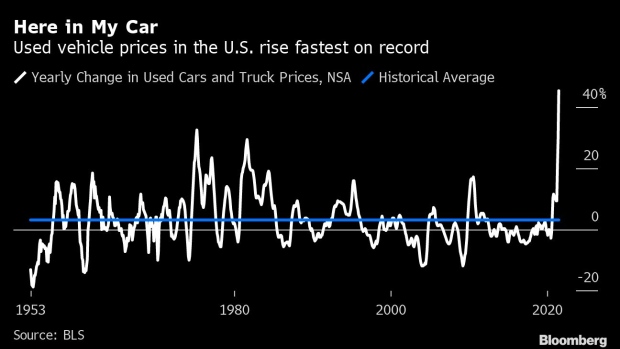 The cost of food away from home jumped 0.7 per cent on a month-over-month basis, the largest gain since 1981.

In earnings reports Tuesday, companies including PepsiCo Inc. and Conagra Brands Inc. noted cost pressures in their supply chains. Conagra has already raised prices and said it will continue to do so -- and that those hikes will eventually help the firm’s margin.

Fed Chair Jerome Powell has said that recent price increases are the result of transitory reopening effects, though more recently acknowledged the possibility of longer-term inflationary pressures. Sustained constraints in the production pipeline, along with a pickup in wages, raise the risk of an acceleration in consumer inflation.

Economists have been watching to see whether price pressures broaden out to categories other than those that are just now rebounding after pandemic-related lockdowns.

Shelter costs, which are seen as a more structural component of the CPI and make up a third of the overall index, rose 0.5 per cent last month, the most since October 2005. The gain was driven by a 7.9 per cent jump in hotel stays. 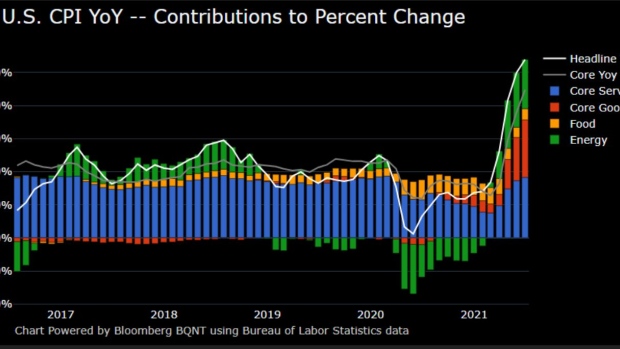 Figures out Tuesday from the National Federation of Independent Business showed 47 per cent of small-business owners, the largest share since 1981, reported higher selling prices in June.

Consumers are anticipating higher prices in the near-term. Median inflation expectations for the coming year increased to series high 4.8 per cent in June, according to the New York Fed’s Survey of Consumer Expectations.