U.S. consumer sentiment continued to strengthen in late April, adding to signs that household spending will remain strong in the coming months.

The University of Michigan’s final sentiment index improved to 88.3 from a preliminary reading of 86.5 and a March figure of 84.9, data released Friday showed. A median survey of economists had called for a reading of 87.5.

Consumer confidence is strengthening as vaccinations quicken and more states and businesses reopen. A third round of pandemic-relief stimulus checks is also bolstering personal incomes, according to a separate report Friday, setting the stage for the economy to gain additional momentum. 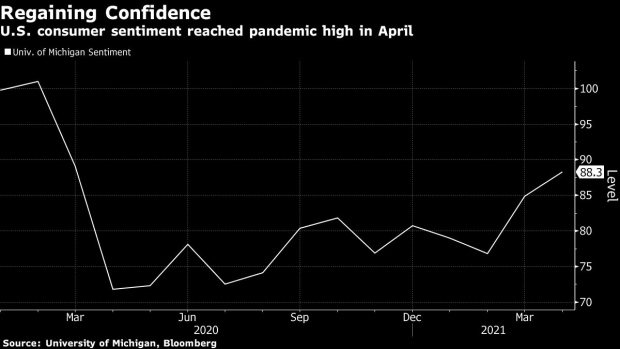 The gauge of expectations picked up in the last part of April, rising to 82.7 from a preliminary reading of 79.7. A reading of current conditions remained unchanged at 97.2 from earlier in the month, according to surveys conducted March 24 to April 26.

“The largest and most important change in the economic outlook in April was that an all-time record number of consumers expected declines in the unemployment rate in the year ahead,” Richard Curtin, director of the survey, said in a report. “The data indicate an exceptional outlook.”

Some 64 per cent of consumers cited favorable developments in the economy, more than double the share that said so in January. More respondents cited gains in employment as well.

Consumers expect inflation to rise 3.4 per cent in the next year, compared with a 3.7 per cent preliminary estimate, according to the report.