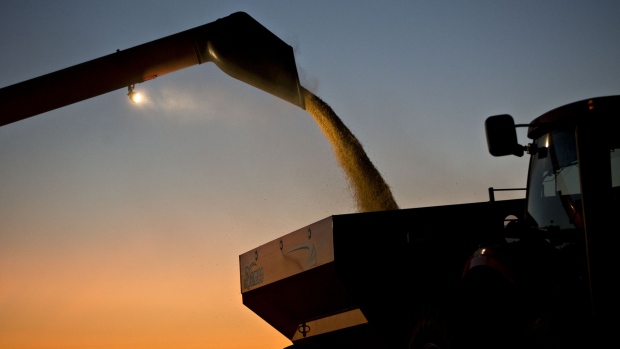 American soybeans, the humble legumes that have become prominent pawns in the U.S.-China trade war, are drying up in more ways than one.

China, the world’s biggest soy importer, just announced purchases in July jumped to the highest in almost a year. But it’s Brazil that’s satisfying the demand and its stockpiles are dwindling. Losing market share are U.S. farmers who are amplifying heir discontent to the Trump administration.

Adding to the stress in the Midwest is a stretch of dry summer weather that’s making this year’s crop look worse than it has the past several years at this point. Weak demand and a lackluster harvest spell trouble for a politically important barometer — farm incomes.

Those grim prospects reflect the collateral damage trade wars inflict and the redirection of supply and demand that tariffs cause. China’s total exports in July unexpectedly rose 3.3 per cent from a year earlier and imports shrank a less-than-expected 5.6 per cent. While shipments to the U.S. dropped almost seven per cent, Taiwan, South Africa and Brazil were among the buyers of Chinese goods at double-digit increases from a year earlier.

The net result last month was a Chinese trade surplus — US$45.1 billion — that doesn’t look much different than the one it posted two years ago, before the effects of higher U.S. tariffs and Chinese retaliation.

Meanwhile, Beijing’s boycott of U.S. agriculture products may not end any time soon. President Donald Trump’s threat of 10 per cent tariffs on the US$300 billion of Chinese imports atop 25 per cent levies already on US$250 billion of products will arrive at a difficult time for many. The deadline is Sept. 1, the day before the Labor Day holiday in the U.S. and just a few weeks before farmers from Iowa to Ohio start tuning up their harvesters.

As the trade war sends investors fleeing to safety, those hunting for yields above inflation have less than half of the bond market to choose from.