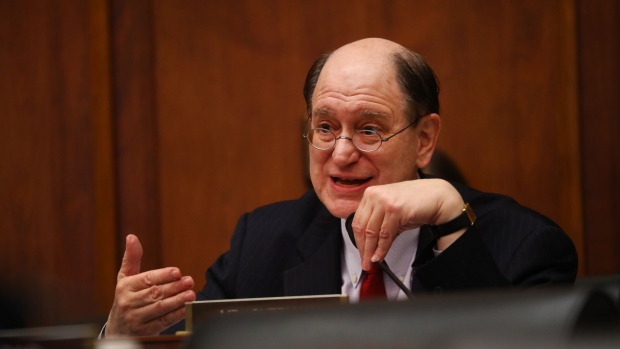 Representative Brad Sherman, a Democrat from California, speaks during a House Financial Services Committee hearing in Washington, D.C., U.S., on Wednesday, April 10, 2019. The chief executives of some of the U.S.'s biggest banks should get ready for hostility as they're about to serve as political-theater targets at a House committee hearing, analysts say. , Bloomberg

(Bloomberg) -- The U.S. House backed a provision that would extend the ban on Americans buying or selling newly issued Russian sovereign debt to secondary markets to punish Moscow for interfering in U.S. elections.

The measure, written by California Democrat Brad Sherman and adopted by voice vote, will be included in the annual defense policy bill that is expected to pass the House with wide bipartisan support later this week. Its prospects in the Senate are unclear.

Targeting secondary-market trading of sovereign debt would mark a major escalation of the sanctions regime. Russian markets have benefited this year from the perception that U.S. President Joe Biden doesn’t want to confront the Kremlin as it deals with more pressing issues from China to Afghanistan.

The provision is one of several sanctions amendments in the House that threaten to revive investor concerns about possible new restrictions on Russia.

The ban would target bonds in any currency issued by the Russian Central Bank, the Russian National Wealth Fund and the Russian Federal Treasury with a maturity of more than 14 days, according to Sherman’s provision.

Current U.S. sanctions ban the purchase of new issues of Russian sovereign debt but do not affect secondary trading. Foreign ownership of Russian bonds rose above 20% for the first time since April this month.

The legislation also requires the Director of National Intelligence to write a report on foreign interference in future midterm and presidential elections. The next midterm elections are in 2022, while 2024 is the presidential election year. After receiving the intelligence report, the president must determine whether to suspend or keep the sanctions in place.The U.S. Chamber of Commerce opposes the provision, arguing that it would limit the ability of U.S. banks to serve their corporate clients operating in Russia.

“While intended to impose constraints on the Russian government, the legislation would have insignificant effect on its ability to secure funds in global markets – given the Russian government’s strong foreign exchange and gold reserves – while severely harming U.S. companies’ operations in Russia,” Neil Bradley, the Chamber’s executive vice president, wrote to House lawmakers Sept. 21.

The U.S. House this week is also expected to approve an amendment to the defense bill that would authorize new mandatory sanctions on entities and individuals responsible for the planning, construction, and operation of the Nord Stream 2 gas pipeline from Russia to Germany.

The amendment written by Representative Michael McCaul of Texas, the top Republican on the House Foreign Affairs Committee, stands out because it would repeal the national interest waiver for sanctions required by existing law related to the pipeline project. McCaul has a sizable contingent of bipartisan lawmakers who signed onto the provision.

The prospects of the two provisions are unclear in the U.S. Senate. The House and Senate have to negotiate a final defense policy bill that will be sent to the president for his signature. The Senate hasn’t yet considered its version of the bill.