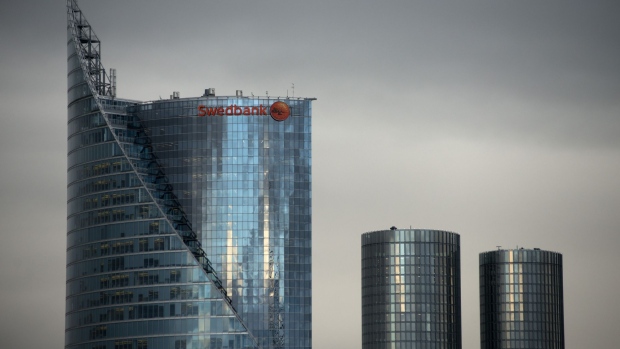 The headquarters of Swedbank AB stands in Riga, Latvia, on Thursday, Oct. 5, 2017. Latvia’s three-party governing coalition has benefited from strong economic performance, with growth quickening to the fastest pace in five years and wages rising almost 10 percent in the second quarter. , Bloomberg

SVT’s investigative program Uppdrag Granskning has uncovered transactions between Russian weapons maker Concern Kalashnikov JSC and Kalashnikov USA, a company in Pompano Beach, Florida, that produces guns based on the Russian design, according to a report on Wednesday. As they took place after the U.S. imposed sanctions on Russia following its annexation of Crimea in 2014, they could constitute a breach of sanctions, according to SVT.

In an interview with SVT, Swedbank Chief Executive Officer Jens Henriksson reiterated that the Swedish bank, which is the largest financial presence in the Baltics, has not yet found any signs that it has breached any sanctions. The Stockholm-based lender will now include SVT’s new information in its internal investigation, Henriksson said.

In February, Uppdrag Granskning published money-laundering allegations against Swedbank that led to the firing of its chief executive and the departure of its chairman and members of the board. Shares of the bank, which in June named former Swedish Prime Minister Goran Persson as its new chairman in an effort to restore confidence, have slumped almost 40% since that report. Investigations are continuing by authorities in Sweden, the Baltics and the U.S.

Swedbank is facing potential fines in Sweden, Estonia and the U.S. Sweden’s financial regulator said in October that findings so far suggest there could be grounds for sanctions, which under Swedish law can mean fines of up to 10% of a bank’s total annual income. In Estonia, prosecutors have started a separate criminal investigation into the bank.

In a statement on Nov. 7, Swedbank informed investors that it had been interviewed by SVT as part of a “follow-up on previously aired programs about suspected money-laundering.” In conjunction with that statement, Swedbank said it made about 1 billion kronor before tax on transactions done via its Baltic non-resident business, the target of multiple probes.

To contact the reporter on this story: Niklas Magnusson in Stockholm at nmagnusson1@bloomberg.net