A spike in housing supply for 2020 isn't going to happen: Royal Lepage

New-home sales in the U.S. increased to an almost 13-year high in June, fueled by record-low borrowing costs and adding to evidence that residential real estate is a bright spot for the economy.

Purchases of new single-family houses climbed 13.8 per cent to a 776,000 annualized pace after an upwardly revised May increase of 19.4 per cent, government data showed Friday. The June pace exceeded all economists’ forecasts in a Bloomberg survey that had a median estimate of 700,000. The median selling price rose 5.6 per cent from a year earlier to US$329,200 as inventory shrank. 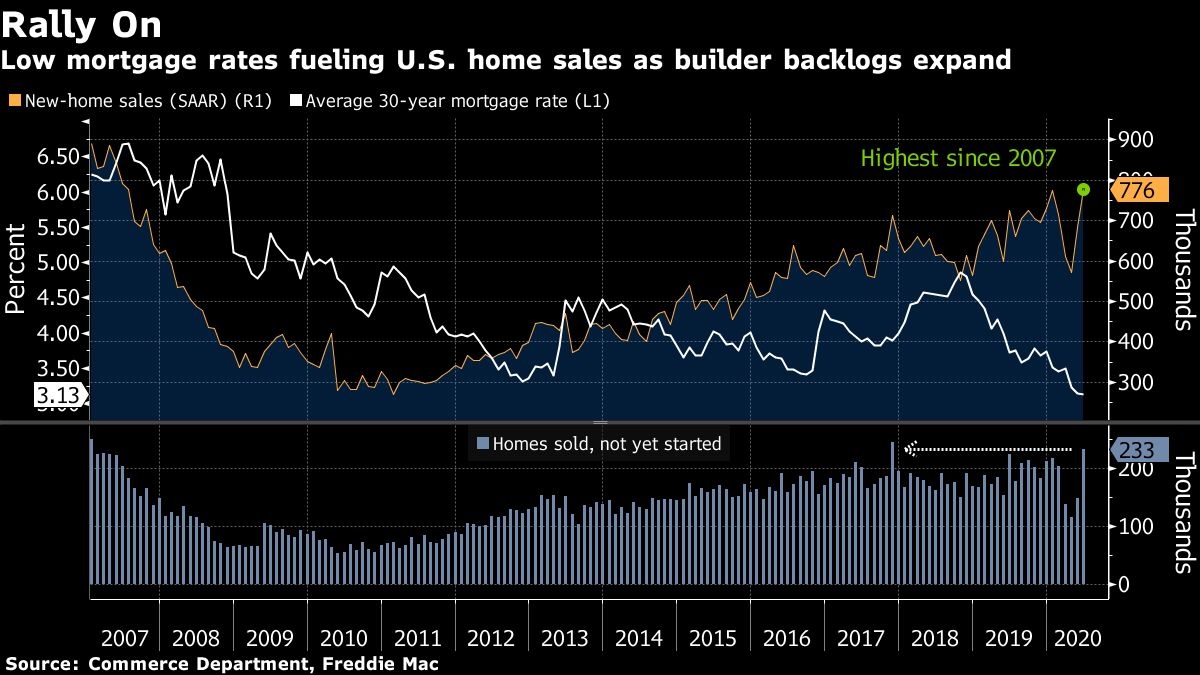 Mortgage rates at historic lows -- along with more stable finances for upper-income Americans during the pandemic -- are bolstering demand and will help spark a pickup in residential construction activity that supports the economy’s recovery. Sales may nonetheless level off as millions of jobs have been lost and many areas of the country experience a pickup in coronavirus cases.

“Housing is the strongest major sector of the economy,” Ian Shepherdson, chief economist at Pantheon Macroeconomics Ltd., wrote in a note. Falling mortgage rates are “more than offsetting the wave of Covid-induced job losses.”

“We are very encouraged by the fact that the momentum of this dramatic recovery continues, as demand has remained strong through the first few weeks of July,” Ryan Marshall, chief executive officer at PulteGroup Inc., said on a July 23 earnings call.

Buyers forced to stay home are looking for new, larger spaces away from urban centers, where the virus can spread more easily. A growing number are choosing to buy new because the existing market is so tight.

The supply of new homes at the current sales pace fell to 4.7 months, an almost four-year low. The report also showed signs that builder backlogs are growing; the number of properties sold for which construction hadn’t yet started climbed to 233,000, the most since November 2017.

New homes account for about 10 per cent of all purchases and are considered a more timely barometer than sales of previously owned properties which are calculated when contracts close. National Association of Realtors data this week showed sales of existing homes surged in June.

The government’s new-home sales data are volatile and have a wide margin of error. There’s a 90 per cent chance that the monthly percentage change was between a four per cent decline and a 31.6 per cent increase, according to the U.S. Census Bureau. The report is published jointly by Census and the Department of Housing and Urban Development.

--With assistance from Prashant Gopal.