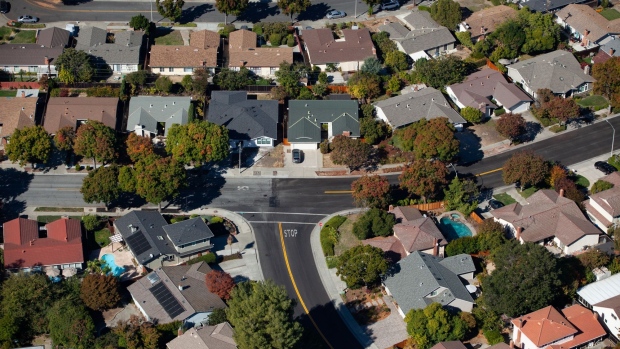 Houses stand in this aerial photograph taken near Cupertino, California, U.S., on Wednesday, Oct. 23, 2019. Facebook Inc. is following other tech titans like Microsoft Corp. and Google, pledging to use its deep pockets to ease the affordable housing shortage in West Coast cities. The social media giant said that it would commit $1 billion over the next decade to address the crisis in the San Francisco Bay Area. Photographer: Sam Hall/Bloomberg , Bloomberg

(Bloomberg) -- Mortgage rates in the U.S. dipped to the lowest level in almost a month.

It was a small move for rates, which haven’t budged much since the early August. Cheaper mortgages have powered the pandemic homebuying rally and enabled borrowers with existing loans to save money by refinancing.

The 30-year average sunk throughout 2020 and reached a record low of 2.65% at the beginning of this year. It has climbed since then, tracking yields for 10-year Treasuries, which have been above 1% since January.

The Federal Reserve is widely expected to start scaling back its monthly bond purchases in coming months, a move that may gradually push up mortgage rates.