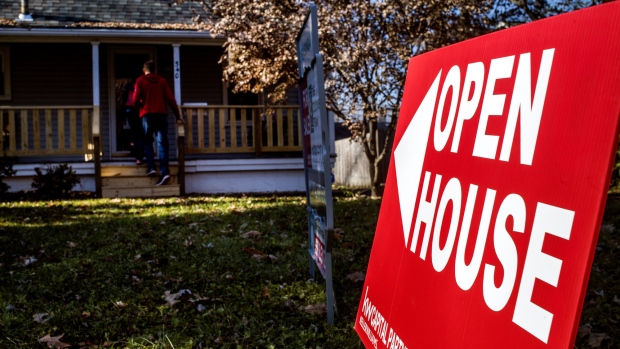 An "Open House" sign is displayed as potential home buyers arrive at a property for sale in Columbus, Ohio, U.S., on Sunday, Dec. 3, 2017. , Bloomberg

U.S. purchases of new homes advanced in May to a six-month high as sales in the South increased to the fastest pace since 2007, according to government data released Monday.

The stronger-than-forecast gain in U.S. sales reflected a 17.9 per cent surge in the South, the nation’s largest region, to a 409,000 annualized pace. While that was the strongest in almost 11 years, demand was mixed in other parts of the country.

The report also showed a six-month high in the number of homes sold but not yet started, indicating residential construction will continue to boost growth. What’s more inventory remains lean. The supply of home available at the current sales pace fell to 5.2 months’ worth, the lowest since November.

The pickup in contract signings is an indication that a build-up in home equity tied to rising property values is benefiting trade-up buyers. Demand also remains underpinned by steady hiring and lower taxes.

At the same time, prospects for first-time buyers and those with modest incomes have deteriorated. Mortgage rates near a seven- year high and home prices that are rising much faster than wage growth remain obstacles for these Americans.

The cost of borrowing may continue to creep higher. The Federal Reserve boosted interest rates by a quarter point in June and increased to two the number of additional hikes possible this year.

Data on existing homes released last week showed that sales unexpectedly fell in May for a second month as an inventory crunch pushed prices up and left buyers, particularly first- timers, on the sidelines.

Purchases fell in two of four U.S. regions, including an 8.7 per cent decline in the West and a 10 per cent drop in the Northeast; sales unchanged in Midwest New-home sales, tabulated when contracts get signed, account for about 10 per cent of the market. They’re considered a timelier barometer than purchases of previously owned homes, which are calculated when contracts close and are reported by the National Association of Realtors The new-home sales data are volatile on a month-by-month basis, with the Commerce Department saying there was 90 per cent confidence that the change in May ranged from a 7.4 per cent drop to a 20.8 increase Report released jointly by the Census Bureau and Department of Housing and Urban Development in Washington