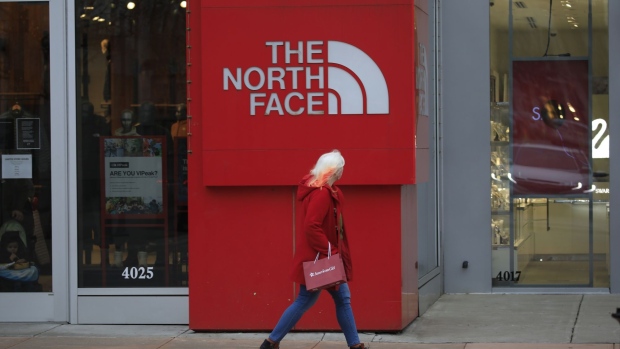 A shopper passes in front of a North Face Inc. store at the Easton Town Center Mall in Columbus, Ohio, U.S., on Thursday, Jan. 7, 2021. The U.S. Census Bureau is scheduled to release retail sales figures on January 15. , Bloomberg

U.S. retail sales surged in January by the most in seven months, beating all estimates and suggesting fresh stimulus checks helped spur a rebound in household demand following a weak fourth quarter.

The value of overall sales increased 5.3 per cent from the prior month after a 1 per cent decline in December, Commerce Department figures showed Wednesday. It was the first monthly gain since September and all major categories showed sharp advances.

Ahead of the report, the median estimate in a Bloomberg survey of economists called for a 1.1 per cent monthly gain in retail sales.

A surge in COVID-19 cases curbed spending at year-end, but since then, virus cases have ebbed and states have started to ease some restrictions on businesses and activity. The ability to shop and eat out, paired with the latest round of US$600 stimulus payments, helped drive spending in the month across a variety of categories.

The jump in retail sales could further embolden Republican opposition to President Joe Biden’s US$1.9 trillion stimulus plan, which many in the GOP say is too big. Even so, Democrats are on track to narrowly pass the package without Republican votes, and the data could also be held up as evidence of how critical relief payments are to the economy and jobs.

The report shows that when fiscal aid “arrives to household balance sheets, it does get turned around fairly quickly and materializes in economic activity,” Michael Gapen, chief U.S. economist at Barclays Plc, said on Bloomberg TV.

With another stimulus package likely in March, “we should see a pretty rapid acceleration in demand and household spending as we move into the into the second quarter, which could be continued if vaccinations continue apace, and mobility gradually recovers over time,” Gapen said.

Nonstore retailers, which includes online stores, rose 11 per cent, the most in two years. Food services and drinking places rose 6.9 per cent as restrictions eased at restaurants and bars across the country. Furniture stores, and electronics and appliance merchants also saw double-digit gains in the month.

“The strength and composition of retail sales (specifically the tilt toward discretionary categories) is an encouraging signal that consumers’ aggressive saving patterns from 2020 are starting to ease — a development which, if sustained, could unleash a torrent of pent-up demand in 2021.”

Gas station receipts rose 4 per cent, which at least in part reflected higher fuel prices. The retail figures aren’t adjusted for price changes, so sales could reflect changes in gasoline costs, sales -- or both. At the end of January, the average nationwide price for a gallon of gasoline was US$2.42 -- roughly in line with pre-pandemic prices.

Other data from the Labor Department showed producer prices increased 1.3 per cent in January, the biggest gain in records dating back to 2009, driven by broad-based gains in categories including energy and food.

The core measure, which excludes energy and food, jumped by 1.2 per cent -- also the most in records -- over the prior month. Meanwhile, a report last week showed the core consumer price index -- a key measure of prices paid by U.S. consumers -- was unchanged in January for a second straight month, pointing to the pandemic’s lingering restraint on inflation.

A separate report from the Federal Reserve on Wednesday showed manufacturing extended its recovery in early 2021. Output rose in January by more than forecast, though it remained 1.9 per cent below the pre-pandemic level.

U.S. Treasury yields briefly touched a one-year high and the S&P 500 dropped for a second day.

“We did not see the typical upswell in retail sales during the holiday season, which meant hefty seasonally adjusted declines,” Stephen Stanley, chief economist at Amherst Pierpont Securities, wrote in a note. “Retail sales on a not seasonally adjusted basis were down by more than 17 per cent in January, but that was a much more moderate drop than what we typically see in the month, so the seasonal adjusted figure was up sharply.”