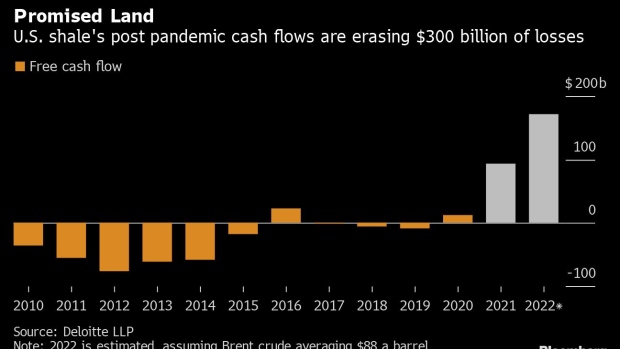 (Bloomberg) -- It may have taken an investor rebellion, a pandemic and a war in Europe, but U.S. shale oil and gas producers are now on the cusp of making back their losses from the last decade.

The industry is on course to make $172 billion of free cash flow this year, enough to wipe out 60% of its losses from 2010 through 2019, according to Deloitte LLP. With smaller gains already chipping away at the $292 billion deficit in 2020 and 2021, U.S. shale should be back in the black next year.

It’s been a long road. When small domestic oil and gas producers pioneered the combination of horizontal drilling and hydraulic fracturing in the 2000s, it seemed like a wealth of riches was imminent. But they were almost too successful, pumping so much that natural gas prices spiraled into a long-term decline through the 2010s. A surge in oil output followed, and OPEC allowed crude prices to collapse in 2014 in an attempt to win back market share from the U.S., which later overtook Saudi Arabia as the world’s biggest producer.

Investors also got burned. Shale companies borrowed heavily to fund production growth, resulting in massively negative cash flow. Energy went from more than 16% of the S&P 500 Index in 2008 to 2% in 2020.

All those trends have now reversed. Shareholders pushed shale to become more financially disciplined, while the pandemic forced executives to cut back on production and spending. Now, with the war in Ukraine causing oil prices to soar above $100 a barrel, the turnaround is almost complete.

The industry is now leveraging the “short-cycled nature of shales to quickly monetize an opportunity, without giving away discipline,” said Amy Chronis, managing partner of Deloitte’s Houston office. “The recent oil and natural gas price surge has given the shale industry a shot in the arm.”