U.S. equities closed within a hair’s breadth of a record high and Treasuries rose as investors continued to debate the impact of resurgent inflation on monetary policy.

The S&P 500 ended little changed less than 6 points below its May 7 record close after fluctuating between gains and losses throughout the session. The 10-year Treasury yield fell to the lowest in a month, with focus turning toward Thursday’s consumer-price data that may offer clues on how far the Federal Reserve can postpone a tapering of stimulus.

Megacap tech stocks including Amazon.com Inc., Apple Inc. and Alphabet Inc. helped prop up the benchmark index, which has gained 13 per cent in 2021. Biotechs were among the biggest drags on Tuesday, a day after many of them rallied after Biogen Inc. received regulatory approval for its Alzheimer’s disease drug. Bitcoin slumped to a two-week low, with some analysts pointing to the recovery of Colonial Pipeline Co.’s ransom as evidence that crypto isn’t beyond government control.

U.S. equities have traded in a relatively tight range around record highs in recent weeks as investors try to balance the economic recovery and a dovish Fed against inflation concerns, high valuations and disparities in global COVID vaccine rollouts. Volatility has returned to the market ahead of the CPI report and the Fed’s rate decision next Wednesday. 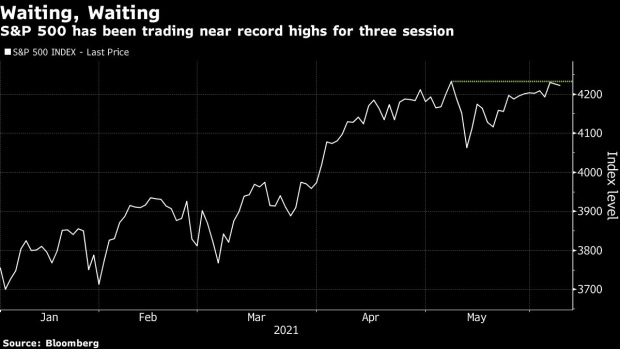 “You look across the board and everything is more expensive,” said Brian Walsh, Jr., senior financial adviser at Walsh & Nicholson Financial Group. “It’s something we’re watching, but the Fed has continued to say they are gong to keep interest rates at bay regardless of the inflation data that comes in. You can only take them for their word and I think that’s what investors are doing.”

Global equities also are near record highs, and Treasury yields have eased for three successive weeks. That suggests the Fed’s assurances are calming fears of Fed tightening for now. Yet on Tuesday, traders were exercising caution before the inflation data, pushing the dollar toward its first gain in three days.

“The tight trading ranges seen so far this month reflect the cautious mood in the market ahead of the inflation numbers,” said Fiona Cincotta, senior financial markets analyst at City Index. “Whilst the Fed reassures that this spike in inflation is temporary, policy makers will need to be out in their droves to calm the market. Delaying action or even inaction could cause economic disruption that the markets fear.”

West Texas Intermediate crude futures reversed a loss of as much as 1.1 per cent on Tuesday, with investors focused on the health of the U.S. market ahead of inventory data on Wednesday. The Bloomberg Commodity Index rose to its highest level since 2015.