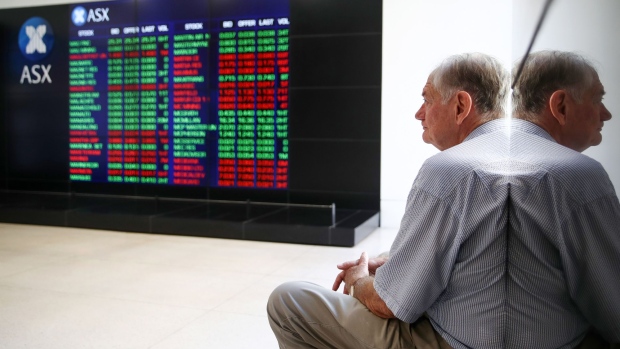 A man looks at an electronic board displaying stock information at the Australian Securities Exchange, operated by ASX Ltd., in Sydney, Australia, on Tuesday, Feb. 6, 2018. Global equity markets are in retreat after Wall Street losses that began in the final session of last week worsened on Monday, with the Dow Jones Industrial Average posting its biggest intraday point drop in history. Photgrapher: Brendon Thorne/Bloomberg Photographer: Brendon Thorne/Bloomberg , Bloomberg

The S&P 500 opened in the red as investors digested the abysmal jobs report that captured data in the period largely before government-mandated shutdowns went into widespread effect. As with record claims for unemployment, the latest numbers bear little information on the current state of the economy, making it difficult for investors to value financial assets.

“No one has ever experienced anything like this,” Bruce Bittles, chief investment strategist at Baird, said by phone. “we’re getting the shock numbers out and the markets tend to front-run bad news. In other words, a lot of the bad news is already built into the market.”

The S&P 500 is down about one per cent in the week, largely holding a rally that propelled it 18 per cent higher in three days last week. That came after the fastest 30 per cent plunge on record as the pandemic forced the economy into a virtual standstill. While volatility has eased somewhat, stocks are still regularly notching daily moves that until recently would have been considered huge.

Earlier, futures contracts briefly erased overnight losses and oil surged on reports large producers are ready to cut output. Crude jumped another seven per cent Friday after a record jump on news the OPEC+ coalition will hold a virtual meeting on Monday and that Russia is ready to cut production.

In Europe, data showing an unprecedented slump in the region’s economy last month pushed the Stoxx 600 Index lower, though it also trimmed its retreat. Asian equities saw modest losses in most markets to cap a third weekly decline in four. The yen weakened alongside the euro, pound and Swiss franc. Treasuries drifted.

With lockdowns for many economies around the world expected to go on for longer, data are showing the severity of the impact. Nearly 10 million people in the U.S. have lost their jobs in the past two weeks, while the virus continues to pressure corporate balance sheets. American Airlines Group Inc. will slash international flying as far out as the end of August as the pandemic batters travel demand through the normally busy summer season.

“We are not going to have the real recovery in the market until what we think is the peak in the amount of infections and deaths,” Stephen Dover, head of equities at Franklin Templeton, said on Bloomberg TV. “We are going to continue to have very wide volatility until we can get over this uncertainty.”

These are the main moves in markets

--With assistance from Yakob Peterseil and Adam Haigh.