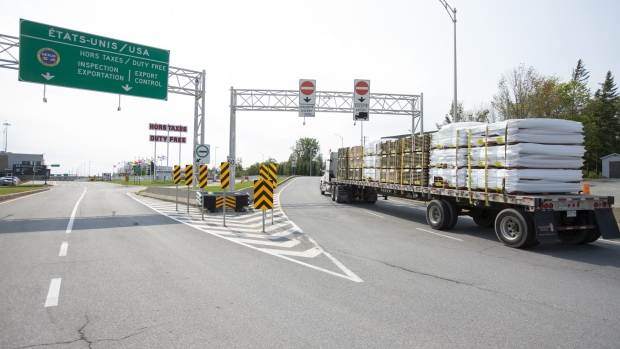 A truck approaches the Canada-U.S. border in Saint-Bernard-de-Lacolle, Quebec, Canada, on Wednesday, Sept. 16, 2020. The U.S. and Canada will extend restrictions on travel across the border until at least Oct. 21, CBC News reported, citing a person with direct knowledge of the situation. Photographer: Christinne Muschi/Bloomberg , Bloomberg

(Bloomberg) -- Canada is standing by its plan to impose a vaccine requirement on all truckers entering from the U.S. starting Saturday, despite worries it could undermine supply chains and damage the economy.

The government had warned in November the exemption would be lifted this month.

The statement puts an end to confusion around the federal government’s policy on the matter. On Wednesday night, Reuters and Canadian Press reported they had received a statement from the Canada Border Services Agency that unvaccinated Canadian truckers would continue to be exempt from the rules.

“The information shared yesterday was provided in error,” according to a joint statement from Canada’s health, transport and public safety ministers. “Our teams have been in touch with industry representatives to ensure they have the correct information.”

Canada has already mandated vaccines for travelers on planes and trains, and is requiring inoculation for all federally-regulated workplaces including airlines, banks and telecom companies.

Trucking industry groups have warned the vaccine mandate could exacerbate a driver shortage and disrupt the flow of everything from food to steel at a time when supply chains are already strained from the Covid-19 pandemic.

Stephen Laskowski, president of the Canadian Trucking Alliance, told BNN Bloomberg television Thursday there needs to be a “smoother transition” to the new rules.

He also said Canada and the U.S. should be working in tandem on the issue.